Imitation Is The Sincerest Form Of Flattery.

Poul Anderson and Gordon R. Dickson were serious writers of serious sci-fi, so I’ve always wondered if somebody lost a bet, or if they just got way too drunk at a convention and talked each other into it. The result was perhaps the funnest alien race ever. Picture teddy bears. Inhumanly tough and strong teddy bears. Inhumanly tough and strong teddy bears with really vivid imaginations. Now picture their discovery by stiff and proper humanity as it diligently spreads its Everybody Gets Along federation through the stars. From the Hoka’s point of view, of course, they discovered humans–rather like discovering a unicorn in the garden. It was love at first sight. 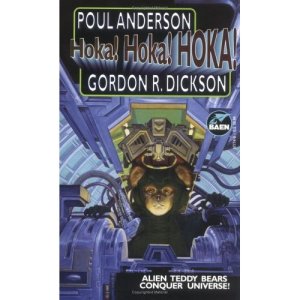 The native Hoka culture was swept away overnight, as the Hokas gleefully adopted every culture, story, and character in human literature. Overnight the planet became a patchwork of Victorian England, pirate/viking-infested seas, desert-dwelling Bedouins, jungles full of talking animals, kingdoms (mostly Arthurian), empires (mostly Roman or French), and, well, you get the picture.

Into all this comes Alexander Jones, our straight-man. The hapless plenipotentiary of the Interbeing League to the planet Toka (we wouldn’t let them rename it Earth), he is given the job of preparing the Hokas for citizenship, but the planet-full of furry cosplayers are having much too much fun. Each story features a crisis complicated by the Hoka penchant for Extreme Memes (having your native staff suddenly decide to go in “quest of the One Ring” is hugely inconvenient).

The Hoka stories have been thoughtfully collected and preserved in the books Hoka! Hoka! Hoka!, available only on old-fashioned paper, and Hokas! Pokas!, also available in ebook formats directly from Baen Books. Are they Forgotten Treasures? Since they’re out of print and I recently got a blank stare from a science-fiction geek when I wondered what Hokas would have done with Star Wars, I’d say yes. Which is a pity, since I’d long ago made a bargain with God; if reincarnation exists then I’m coming back as a Hoka. So out-geek your sci-fi/fantasy friends; order these books and learn why references to role-playing ursinoids popped up in alien crowd-scenes across the genre for many years.

I am a reasonably successful self-published author ("successful" means I can pay the bills and am highly rated in my Amazon category), former financial advisor (writing is more fun), and have something in common with Mitt Romney and Donny Osmond. Guess.
View all posts by George →
This entry was posted in Book Reviews and tagged book review, book reviews, ebook review, ebooks, Gordon R. Dickson, Hoka, Hoka! Hoka Hoka!, Hokas, Hokas! Pocas!, humor, Poul Anderson, science fiction. Bookmark the permalink.