Wearing the Cape: The RPG, Astra 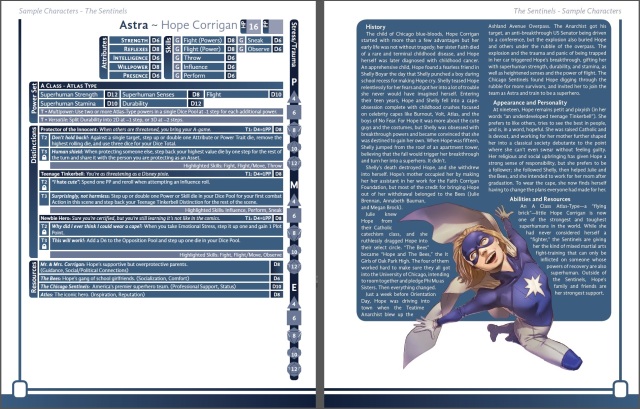 Hello, all faithful and impatient readers! Nothing new to say about Small Town Heroes, other than it is coming along and I’m feeling very good about it (anything more would be spoilers). Still looking at a late-summer release date. Right now, I thought I’d take a quick break from writing to show everyone some of the fruits of the beta playtests of Wearing the Cape: The RPG.

So that’s Astra’s Hero File. Pretty, isn’t it? For anyone familiar with the Cortex Plus game system, it should tell you a lot. During the first playtest round we have experimented with multi-dice (no longer with us), using three character Attributes (Physical Ability, Mental Ability, Social Ability), seven Attributes (Strength, Stamina, Reflexes, Senses, Intelligence, Willpower, Presence), and finally five Attributes (Strength, Reflexes, Intelligence, Willpower, and Presence). We have also played with Distinctions, Skills, Specialty Assets (gear), and Resources.

None of the playtesting was done by me–I’ve been too busy writing–but a handful of enthusiastic groups have hugely changed the original concepts I threw together earlier in the year and the beta-test rounds are not yet over. Thank you everyone who has participated so far!

So the above pic is just a thank you to everyone who has helped out so far; in a few weeks we should have generic character sheets based on this design. The Big Rewrite that will launch Round 2 must still wait on the completion of Small Town Heroes, but things are moving along nicely.

I am a reasonably successful self-published author ("successful" means I can pay the bills and am highly rated in my Amazon category), former financial advisor (writing is more fun), and have something in common with Mitt Romney and Donny Osmond. Guess.
View all posts by George →
This entry was posted in Wearing the Cape and tagged games, roleplaying games, Superheroes, Wearing the Cape: The Roleplaying Game. Bookmark the permalink.

19 Responses to Wearing the Cape: The RPG, Astra