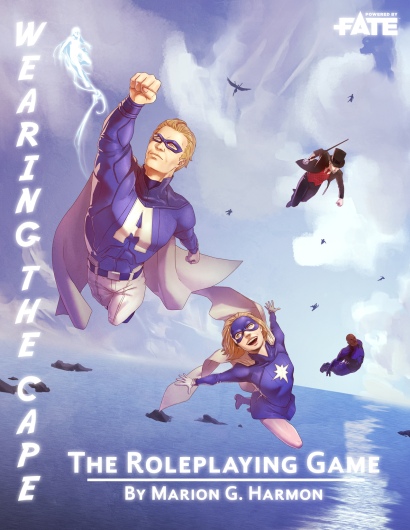 Hello, everyone! I hope that all of you are looking forward to this holiday season—I certainly am! And that’s despite being too busy for words. Needless to say, I have news.

First up, Ronin Games has done amazingly well. It is the highest-rated of all my titles on Amazon.com (last I checked, 4.7 Stars). I am grateful for all your positive reviews received and reviews to come; reviewing readers are in large part the source of my title’s visibility on Amazon, which means that showing your appreciation there—even a single line and a rating—puts my books in front of more readers and spreads the love. Thank you.

Second, some fans have expressed worry since I have not yet committed to a 2016 WtC novel. I have every intention of releasing Wearing the Cape, Book 6 in 2016; however, at this time I have only a general idea of what a couple of the subplots will be, and a good idea of the source of the main conflict. Serious plot development has taken a back seat to Wearing the Cape: the Roleplaying Game.

However! In between rules editing in preparation for the renewed playtesting of the game, I have been keeping my writing muscles strong by working on an anthology of WtC short stories! It is tentatively titled Wearing the Cape: Crossovers. WtC:C will be a somewhat shared anthology, since while I am writing most of the stories I have talked one fellow superhero-fiction writer into co-writing one of the stories with me, and another as-yet-unpublished writer into submitting her own for the anthology. I have also received approval from a well-known sci-fi/fantasy author, Seanan McGuire, to do an Astra/Velveteen crossover (with the caveat that it may not be canon in the Velveteen universe).

Since the Velveteen Vs. stories are some of my favorite superhero fiction, this ranks as the Best Christmas Present Ever. Well, maybe not that high, but it’s close.

I may yet get one or two more authors interested in crossover. Meanwhile, when I set up the newsletter I promised the occasional piece of short-story fiction; this seems the perfect place to introduce what will be the first story in WtC:C, Dating Games! I had a lot of fun with it, and if you would like to read it you can get it through the newsletter (sign up, then check out the latest one).

A final note for those wondering about progress on Wearing the Cape: the Roleplaying Game.

The first 6 chapters of rules are about to go into playtesting.

Work on the art proceeds apace—that’s the new gamebook cover up top.

We are still looking at a January Kickstart to pay the production costs and print the nifty hardcover editions!

So a lot is happening, and more is going to happen. Meanwhile, everybody be well and be safe this holiday season.