I did not expect to be writing another Radical Moderate post for awhile, but with the presidential primaries coming up quickly, I thought I’d better get my two cents in.

No, I’m not going to tell you who to vote for.

Instead, I’m going to talk about the Worst Form of Government; i.e., democracy.

Because democracy sucks. Really. Every election cycle is the same—incumbents or wannabe-incumbents puffing their accomplishments, covering their mistakes, slinging crap at their opponents, each side gathering growing Greek choruses explaining why their chosen candidate walks on water and pisses wine. Their candidate is always the one who will finally clean the shit out of the Augean Stables, whip the money changers from the holy temple, et cetera, et cetera.

And of course my favorite syllogism rules the election cycle.

The only difference is the candidates must at least debate a little. But it’s mostly pro-forma, and studies have shown that public debates rarely move the needle of public opinion much.

And when the election is over? Sometimes the winning candidate actually picks up a shovel after taking office, but then he must fight the rest of his political party plus the other party to get anything real accomplished—while fighting for his political survival against opponents who don’t want him to accomplish anything and who will try an minimize or discredit everything he does accomplish, so that they have a chance of beating him in the next election.

Most of the time nothing substantive gets done. The stables remain full of crap and buzzing flies.

And now that I’ve thoroughly depressed you, a word from Winston Churchill: 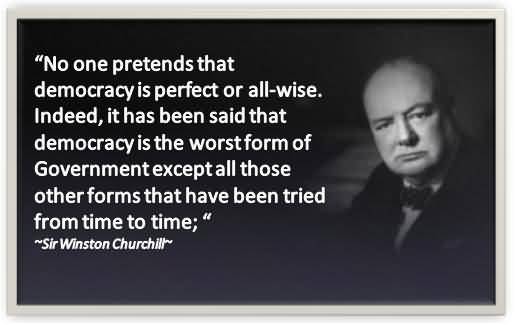 Because the man was absolutely right, and here’s the disconnect. “No on pretends that democracy is perfect or all-wise.” Except we do, or at least we believe that it can be made reasonably perfect or nearly all-wise if we just elect the right people. This is because we labor under the delusion that elections are supposed to reveal the wisdom of the people; a water-to-wine miracle in which a largely uninformed citizenry somehow identifies and chooses the most informed and qualified citizen to lead them.

Sounds a little silly, put that way, doesn’t it? And that’s not even beginning to talk about the effects of tribal thinking (by tribes I mean liberals and conservatives).

The truth is that elections are not there to give us the best possible leadership; they never do. The best man or woman for the job is almost never the most electable one—the paradox is baked into the system. Elections are there to give us the opportunity to hold our leaders accountable. Without democracy, the only way for citizens to hold their leaders accountable is through armed revolution. Bullets are the only alternative to ballots.

So, what should you be looking for in a candidate? That is very much a question of taste and ideology, and I’m not going to say Vote For X! 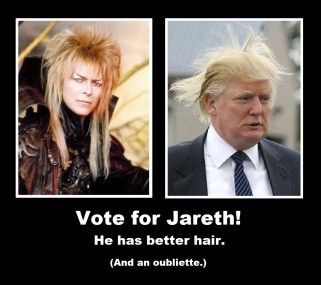 Okay, I will say this; whatever your political tribe, look carefully at your candidates. All of them will claim that they can fix everything, or at least fix Problem X. They might actually be able to do some good, there, who knows? But most of the time applying government to social and economic problems is like trying to do brain surgery with a drill (to extend the metaphor, you need the drill, but only up to a point).

In my opinion, the chief qualification for office a candidate can display is his understanding of what we are. We are not a pure democracy (pray daily that we never become one).

The framers of the Constitution, the political leaders who argued for and against it, and the citizens who voted to make it the Law of The Land, were deeply suspicious of government power. Of course everyone is, but they were also deeply suspicious of the power of the people. They understood that a majority could be as bad a tyrant as one man, so they wrote up and ratified a grant of power with all sorts of Thou Shalt Nots; the Constitution, and most specifically, the Bill of Rights, is the Ten Commandments for US government.

Famously, at the close of the Constitutional Convention of 1787, an attendee asked Ben Franklin “Well, Doctor, what have we got—a Republic or a Monarchy?” Franklin replied “A Republic, if you can keep it.”

We are a constitutional democracy, within the framework of a republic. The next president must be the candidate who best respects the limits of the Chief Executive and the constitutional limits of American democracy. Democracies die when they lose sight of the limits of government power. The First French Republic devolved into terror, tyranny, and empire. The Italian Parliament freely elected Benito Mussolini—the father of modern fascism—in 1922. In 1925, “by necessity,” he set up a legal dictatorship.

None of the current candidates, of either party, are a potential Mussolini. But as we follow successive leaders who whittle away at those Thou Shalt Nots, we get closer to the day when the we find ourselves living under an unconstitutional democracy, led by a government that considers mere rights subordinate to peace, efficiency, prosperity, fairness, equality, and all good things. It will do what is necessary, for our own good.

To end with one last quote; “Necessity is the justification for every infringement of human liberty: it is the argument of tyrants, the creed of slaves.”

In this election cycle, vote for the candidate most likely to sustain and strengthen the worst form of government.

12 thoughts on “The Radical Moderate 3: “The Worst Form of Government.””