She Is A Wonder 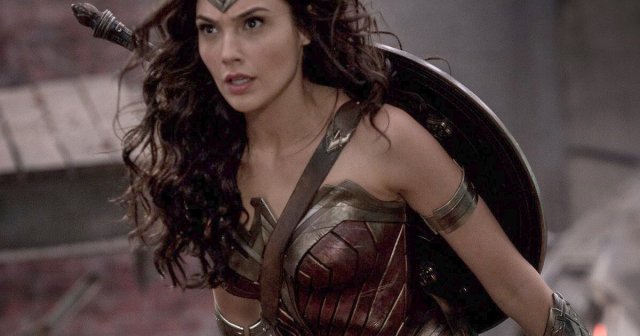 It is easy to forget that “wonder” is a much bigger word than its normal usage.  We say, “I wonder what time the movie starts.” Wonder Woman brings the wonder in its old sense, the emotion aroused by something awe-inspiring, astounding, or surprising. Gal Gadot also delivers a noble and yet wondering quality to her portrayal of the Amazon princess. So for both the story and the woman, I say it’s time to go to the movies. Now to the details. . .

I could go into huge detail breaking down the symbolism and tropes expertly deployed in Wonder Woman, which is, in my opinion up with the best of the DC superhero movies recently released. But I won’t. I’ll tell you a few things I liked, and a couple of things I didn’t; though the movie is great, it isn’t perfect.

(Here There Be Spoilers.)

The lush cinematography was worthy of a superhero movie, none of this sepia-toned stuff like we’ve seen in the last couple of Superman movies. It’s not four-color, by any means, but it’s brighter.

This Diana is the Wonder Woman of long established comic-book canon; of the three big DC heroes (Superman, Batman, Wonder Woman), her movie portrayal has been the least deconstructed.

I was wondering how the DC Cineverse would tell Diana’s origins and portray the Greek gods; after all, as with the Marvel Cineverse, the DC movie writers have largely avoided invoking straight-up magic and mythology. It’s all been “superscience,” really. The answer they came up with was. . . a story Hypolita tells to her daughter. My best guess is that the Greek gods were some kind of “space gods”, and in any case they’re no longer around except for Ares.

Speaking of Ares and the gods, the portrayal of their actions and motivations in the story Hypolita tells is a thinly disguised Christology. The gods create man to be good, Ares hates them and corrupts them, and goes to war with the other gods when they won’t help him destroy mankind. Ares is defeated, but not forever, and he remains in the world to further the corruption of mankind. Zeus creates Diana, who finally defeat Ares to save mankind. . . Diana, raised in a paradise, is innocent of all the evils of mankind, but is willing to fight and die to save humanity from Ares. Right there in the movie, it says that humanity is corrupt, undeserving of salvation. We are saved by love. It’s hard to get much more Christological than that.

And the action was fast, furious, leavened by just the right amount of humor and even serious commentary on war. It’s a great ride, and a movie worth adding to my collection.

Every movie does stuff like this. Every. Single. Movie. So this stuff doesn’t really count against it.

Thymescria (Paradise Island) is located somewhere in the Aegean Sea, between Greece and Asia Minor. We definitely know this, because Steve Trevor’s plane, which he flew from a base in the Ottoman Empire (probably somewhere in modern-day Turkey), crashes there. He and Diana leave the island by boat, which, overnight, arrives in England, sailing up the Thames to London. What?

I know why they did this; there had to be a few scenes that highlight Diana’s amazement/bewilderment with “man’s world.” They wanted to put those scenes in London to keep the plot pace clicking. But there are other things they could have done that wouldn’t break your suspension of disbelief. There were a few pieces like this; other than the overnight voyage, I was able to pretty much ignore them.

But there was this; the Amazons spoke English. This is handwaved by Diana claiming (and demonstrating) that the Amazons know many, many, many languages. Okay, but how? After all, they are completely cut off from and ignorant about the rest of the world. There are hints of sacred “superscience” in the background (instead of a Blue Healing Ray, they have blue-glowing healing pools, and Diana’s armor and weapons are super as well). I think the original plan was for them to have some kind of Sacred Object of Understanding that could instantly learn and teach such things, but if so it was dropped. I think it would have been cool if they’d spoken ancient Greek (with subtitles), until suddenly gifted with the Language of Man as spoken by Steve Trevor. I could imagine the Amazons having a Classical Age understanding of the world (they used bows and arrows, after all), while possessing some millenia-old gifts from their space gods.

Oh yeah, and then there was the question of Diana’s age. Either she took a long, long time to physically mature, or her birth was much more recent than you would think from the story her mother told her, or. . . I’m not sure what the alternative is; possibly the whole island being a Brigadoon? If it did take her a long time to grow up, that would explain at least how she learned so many languages; she was in school forever (though it still doesn’t explain her teachers).

In Diana’s final battle with Ares, it was like the two of them were just pulling new powers out of their hats from moment to moment. In Diana’s case, it was foreshadowed that she didn’t know her full potential, but the whole thing violated one of the major rules of superhero fights; before the Big Fight, you must clearly establish the strengths of each side. Ares used superstrength, telekinesis (down to the molecular level), ultra-class electrokinesis, and, oh yeah, command of mental powers, illusions, maybe teleportation. It really was hard to keep track.

Truthfully, the most satisfying fight of the movie happened much earlier.

But these are minor details; overall I give Wonder Woman 4 out of 5 stars. It was a solid, satisfying movie, a worthy entry into the ranks of superhero movies of the last few years. I look forward to the sequel.

I am a reasonably successful self-published author ("successful" means I can pay the bills and am highly rated in my Amazon category), former financial advisor (writing is more fun), and have something in common with Mitt Romney and Donny Osmond. Guess.
View all posts by George →
This entry was posted in Movie Reviews and tagged Movie Reviews, superhero movies, Wonder Woman. Bookmark the permalink.

5 Responses to She Is A Wonder