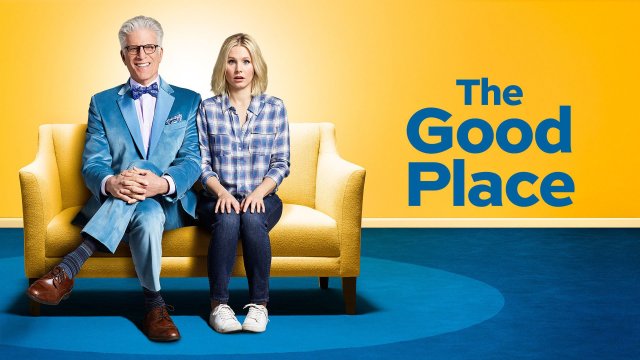 In 2016 I reviewed the premiering TV series, The Good Place. I have a weakness for oddball shows that don’t always do well (one of my favorite Best Canceled Series will always be Wonderfalls). So I worried that The Good Place would prove too outside-the-box for many viewers to appreciate and stick with. I also worried that the writers of the show itself would wander off into the woods and away from what it all appeared to be “really” about. I needent have worried; I watched the series final last night and the show stuck the landing.

So, what was it about, really?

My initial hot-take on the show had been: “I watched the premier last night, it was delightful, and I highly recommend that everyone catch it and judge for themselves. Especially since I have a strong suspicion that Eleanor and everyone else is being lied to. Something…benevolently sinister is afoot. Can something be benevolently sinister?”

The summation of the action, with the big reveal at the end of the first season (SPOILERS AHEAD), was “…human-loving Good Place architect, Michael, is a demon sent from Hell to run an experiment on the idea that humans are their own best torturers. He selectively chooses a group of four people who he decides are perfectly offset to torture one another and, in the beginning, it appears to work. Chidi tortures Eleanor with his indecisiveness, inflexibility, and scholarly disposition, likewise Eleanor tortures Chidi by constantly putting him in situations where he must make decisions or go against the very moral tenets he espouses. Tahani tortures Eleanor by continuously reinforcing her superiority, Jason tortures Tahani by being unable to return her incessant need for validation (as he is initially the silent Buddhist monk Jianyu), and for Jason the mere fact he is forced to pretend he is someone other than himself is torture in itself. Each character is designed to bring out what they hate most about each other and themselves, resulting in the new form of torture Michael is experimenting with.” (Wikipedia)

So, I nailed it–except that I thought that the TRUTH would turn out to be that Eleanor, Chidi, Tahani, and Jianyu were being lied to and were really in Purgatory–a sort of afterlife correctional facility designed to give them the opportunity to unlearn their mistakes and become better people. This turns out to be more than a little ironic.

The overarching theme of The Good Place turned out to be an exploration of ethics. What does it mean, to be good? The amazing thing about TGP was that it 1) never lost sight of its core theme, and 2) that it remained hilariously and cleverly written from beginning to end; the medicine of moral philosophy went down with the sweetener of sometimes hysterical laughter.

But as great as all that was, I think TGP turned into something more. A second theme that emerged in the 3rd and 4th seasons was the question of what an ethical universe would look like. This took the show from philosophy to theology.

To be clear, the show went out of its way to not address systems of religious belief: Christianity, Buddhism, etc. (thank the writers for that). It never tried to imagine the afterlife it presented in any way other than allegorically. It was agnostic. But every religion holds to some theological construction of cosmic justice, and every religion claims that the universe is, in fact, a morally ethical creation. For the last two seasons the show asked that very theological question; what would the afterlife look like in an ethically just universe?

The irony was that in the end it envisioned an ethically just afterlife operating exactly as I’d imagined at the beginning of the show: it eventually recreated the “neighborhoods” as places of spiritual reform and improvement, where all who wound up in the Bad Place due to their actions in life could learn, grow, and eventually enter the Good Place.

And what is the Good Place? The show conceived it as an inversion of Jean Paul Sartre’s formulation “Hell is other people.” The Good Place is the place where our human relationships are restored and made whole. Heaven is other people, too.

Could it be true? Serious Christian writers have argued that it could be so, and I do personally believe that a God worth worshiping would require that it be so. I hope that it is so. In the meantime I do think that, true or not, we should act as if it were so.

Postscript: apropos to my declared love of oddball and probably short-lived shows, check out the Zoey’s Extraordinary Playlist pilot. You’ll thank me, I promise.

I am a reasonably successful self-published author ("successful" means I can pay the bills and am highly rated in my Amazon category), former financial advisor (writing is more fun), and have something in common with Mitt Romney and Donny Osmond. Guess.
View all posts by George →
This entry was posted in TV Reviews and tagged philosophy, The Good Place. Bookmark the permalink.

8 Responses to The Great Place