In which Captain Kirk is the very model of a modern major general.

And now to sink for all time my reputation as a serious literary intellect. In my college days I couldn’t get enough of Star Trek–specifically Star Trek novels, and Penguin Books was cooperating by pumping out a title or three per quarter. Needless to say, quality varied, and “good” can certainly be a matter of taste. Only one of these titles has stayed in my library through all my subsequent moves. I speak of How Much For Just The Planet, by John M. Ford. 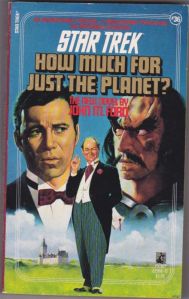 It seems that a group of eccentric colonists settled the planet of Direidi, a planet far off the busy sub-space lanes in the Organian-enforced neutral zone between Federation and Klingon space, in order to create a society based on the principles of… melodrama. And slapstick. Deranged vaudevillians, the lot of them. Are they left alone to carry on their quirky social experiment? Of course not. Before the ink has dried on their planetary charter, a Federation survey ship discovers the Great Dilithium Motherload on the planet–and the survey ship is just as quickly discovered by Klingons. So now the race is on to “develop” this strategic resource, and to the Dereidians there’s not much to choose between the two sides; the Klingons will mine the mountains naked and then go home, while the Federation will relocate the colonists, then mine the mountains naked and then go home. And apparently even the Organians expect the colonists to cut some kind of deal.

Fortunately the Direidians have a Plan. Plan C, to be precise. So the Federation sends Kirk and the Enterprise (and a diplomat), the Empire sends Kaden and the Fire Blossom (and a diplomat), and what ensues is a terrible thing to watch. Bunting is involved, and choreographed musical numbers, and a cat-burglar, and combat-golf, and a McGuffin, and an adventure beyond the Thunderdome, and… pies. Lots of pies. The horror.

How Much For Just The Planet is available on the Kindle in both the US and UK markets, although perversely for more than a new paperback edition costs. Ford would have appreciated the absurdity, and it’s still worth it.

I am a reasonably successful self-published author ("successful" means I can pay the bills and am highly rated in my Amazon category), former financial advisor (writing is more fun), and have something in common with Mitt Romney and Donny Osmond. Guess.
View all posts by George →
This entry was posted in Book Reviews and tagged book review, humor, John M. Ford, Pies, science fiction, Star Trek. Bookmark the permalink.

7 Responses to In which Captain Kirk is the very model of a modern major general.