With superheroes becoming more popular, they have begun to spread outside their traditional comic-book and movie-screen mediums. Serious novel writers are taking notice of the dramatic possibilities inherent in superheroics–which are, after all, no more implausible than the flood of modern-fantasy stories (vampires, werewolves, and witches, oh my!) taking over every genre. Of course this made it a great time to publish Wearing the Cape, but I’m far from the only author taking a crack at superhero-fiction; a couple of months back I reviewed Charlotte Powers: Power Down, a brilliant YA superhero novel. It’s great to hear that Ben White is writing a sequel.

Now comes another entry into the field: Confessions of a D-List Supervillain, by Jim Bernheimer. 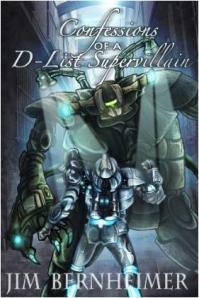 Jerry’s vision is very different from both Ben White’s and my own. The setting is Open Source, full of mutants, experiments, gadgeteers, magic, gods, and aliens, and the top-rank heroes and villains are powerful enough that only other superhumans (or superscience-makers) can deal with them at all. It is also a setting that is one step further along the spectrum running between the old Golden Age tradition–where heroes are Good, villains are Bad, and for all the property damage nobody ever dies–and the newer Dark Age tradition (what I call the Alan Moore and Frank Miller traditions) where heroes are just as twisted as the villains, just in more socially useful ways.

Confessions is the story of Mechani-Cal, a D-list supervillain gadgeteer. An engineering genius who got screwed over by Prometheus (this world’s Stark Enterprises), he struck out on his own, became a supplier of high-tech weapons for supervillain masterminds, pulled a few heists of his own to finance his research, and obsessively worked on upgrading his armor so he could go toe-to-toe with Ultraweapon (Tony Stark/Ironman)–a hopeless obsession since the Ultraweapon armor has whole divisions of research and development teams always working on it. Face it, Cal’s a bit of a loser.

But then mind-controlling bugs escape from an exploding supervillain’s lair and turn the entire human race into drones without orders. Loser or not, as one of the few who escaped enslavement due to his armor and status as a low-priority threat, Cal has to step up and save the world. After that life gets interesting.

Confessions skirts dangerously close to the Beware the Supermen trope. Unlike Alan Moore’s Watchmen, it doesn’t completely deconstruct the superhero, but it does gleefully dance around on top of the slippery slope of corrupting power, and is shot through with a kind of film noir sensibility–the kind of movie where the costumes don’t tell you who the good guys are. It’s hard to review a book like this without giving important twists away, so I won’t discuss plot here. It’s a fun story, well-told, and about the only criticism I have is that the story structure means that, in Lord of The Rings terms, Cal throws the Ring of Power into Mount Doom halfway through the book. Sure, everything after that is important, but not Save The World important; in my opinion, Mr. Bernheimer should have divided it into two shorter novels (novellas?). I’d have paid to read them both.

3 thoughts on “You must remember this…”