Red Is The New Black

Not so long ago someone asked me if I thought the superhero genre was exhausted, and my response was that I felt it was just getting started. I compared it to the vampire phenomenon, and how the bloodsuckers seemed to have taken a bite out of every genre imaginable. One of them even invaded Wearing the Cape and is getting her own sequel–perfectly in keeping with tradition, considering that vampires have been lurking around the edges of both DC and Marvel superhero universes for decades.

Vampire-hunter Blade lives in Spiderman’s neck of the woods.

One reason I have felt that superheroes are only beginning to finally completely break out of the comic-book/graphic novel world is that, after a string of really awful movies, Hollywood has finally mastered the superhero formula, and for better or worse Hollywood has a huge impact on the entertainment industry. Just think about what Tom Cruise and Interview with the Vampire did for the vampire craze. Also, we now have whole generations of adult readers who grew up with comic-books that matured along with them. Once upon a time superhero comics were all about the Bam! and Pow!: today they often embrace plots, themes, and character-arcs worthy of any novel. Both DC Comics and Marvel Comics have printed novelizations of particularly epic story lines, as well as stand-alone stories of their most beloved characters and teams.

But are superheroes the new vampires yet? They’re getting there; yet another sign of breakout is that they have started appearing in genres not designed for them. One example of this is a new series of self-published books, the Bigtime Superhero series, by Jennifer Estep. 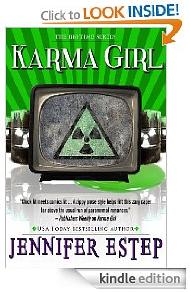 So far the series includes Karma Girl, Hot Mama, and Jinx. Ms. Estep’s books are performing well on Amazon (they average 4-star ratings, and are all in the top 10 books for their category). I’m not going to review them here, precisely because they illustrate my point; these stories don’t fit into the superhero genre–they’re pure chick-lit. I’m sure they’re good, but for me they’re the same as the bestselling Twilight series is for fans of Anita Blake, Vampire Hunter: the world is big enough for sparkly vampires–I’m just not going to read about them.

But this is my point; Ms. Estep’s books are a take on superheroes that will appeal to a reading audience to whom comic-books are completely foreign. I couldn’t write Ms. Estep’s books, but hundreds, hopefully thousands of readers will enjoy them. And they’re one more brick (three bricks, I suppose) in the foundation of modern superhero literature. Aided by Hollywood and television, superheroes are escaping the small box they’ve always been in,  gradually venturing into the mainstream in the YA, Action, Sci-Fi/Fantasy, and even Romance genres.

There is an obvious upside to this. When I finished Wearing the Cape last year and started hunting for an agent, I sent out close to 100 query letters. The universal response was, “An interesting read, but not one that fits our needs at this time.” No literary agency could pigeonhole it into one of the traditional genres. Is it Modern Fantasy? Science Fiction? I finally self-published, on the advice of Mark Williams and on the urge to get it done so I could move on to the next book. Today Wearing the Cape holds a 4.75-star Amazon rating–better than a lot of professionally published novels–bounces between #3 and #5 in its Amazon category, and is averaging nearly 10 sales/day and climbing. If agents and publishers out there are paying attention to the success of Wearing the Cape and others, the next writer to submit a superhero story of any kind and in any genre will receive more serious consideration. Red is becoming the new black.

I am a reasonably successful self-published author ("successful" means I can pay the bills and am highly rated in my Amazon category), former financial advisor (writing is more fun), and have something in common with Mitt Romney and Donny Osmond. Guess.
View all posts by George →
This entry was posted in Wearing the Cape and tagged ebooks, Hot Mama, Jennifer Estep, Jinx, Karma Girl, superhero genre, Superheroes, Wearing the Cape. Bookmark the permalink.