July has been a big month for Wearing the Cape, made more interesting by my decision to move from the original $.99 ebook price to $2.99; the decision immediately slashed my sales numbers. Why did I do it? Well, I’d gotten some good reviews, my numbers were rising, and I have a problem with Amazon’s royalty system.

You see, for anything priced less than $2.99 they will only pay you 35% per sale, meaning they’re pocketing most of the money for selling a book that really “costs” next to nothing to cache on a server somewhere.

Now there are arguments for keeping the price that low–the main one being it makes impulse-buying incredibly easy. After all, if a new book sounds interesting but you don’t know the author, for $.99 it’s easy to take a chance. If you don’t like it, you’re out less than the cost of a cup of coffee. McDonalds coffee.

But as I watched my category, I found Wearing the Cape competing with two other self-published books: Confessions of A D-List Supervillain and In Hero Years…I’m Dead. Both books cost significantly more than $.99. Confessions cost $2.99 and In Hero Years cost $5.99, and both were doing well. This made me think about my audience.

Comic-book readers are used to paying $2.99 or more for a single comic, often picking up two, three, a dozen titles a month–in other words they’re used to making an investment in their reading entertainment. 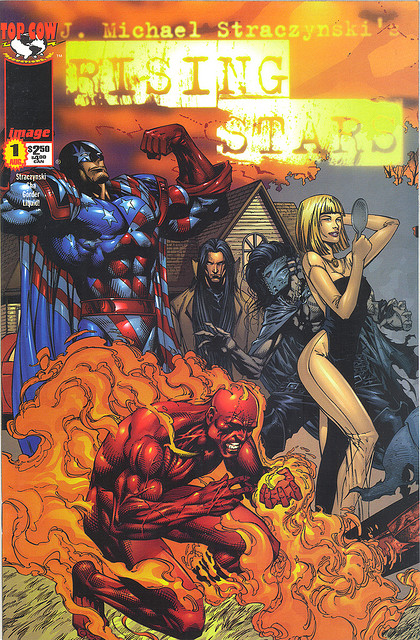 For trying something new, there is little difference between paying $1 and $3. Then there is the value proposition; if $3 is the standard cost of a professionally done comic, then charging $3 for the book makes a value-claim of its own.

So I decided to give $2.99 a shot. After all, with a 70% commission rate, even if it cut sales in half I’d still make three times as much (70% of $2.99 is roughly $2–more than 6 times what I was getting). So beginning the second week of July, I bumped the price by $2. And sure enough, sales dropped. But not by half. And they’ve come back (see nifty chart below) so that I am experiencing a rate of growth close to what it was before.
Of course six weeks is only a snapshot that doesn’t answer all the what-ifs. But one thing is certain: to make the money I earned last week, at the old price I would have had to sell 450 books. In one week. Would I have had that kind of growth? Doubtful.

But here’s the fun bit.

After spending nearly a year seeking an agent, I self-published on April 25th, three months ago. Assuming that I had found an agent, who then immediately found me a publisher (an insanely optimistic assumption, since agented writers often go for years before closing a book deal), I would likely have earned a $7,000 advance–the industry standard for newbie writers–then had to wait for at least a year for the publishing company to actually publish my book. They might have printed 7,000-15,000 copies, not all of which would have sold, and I would probably have never seen more than my initial advance.

So. After spending a year writing Wearing the Cape and another year finding an agent/publisher for it, I would likely have made no more than $7,000. But what is happening now?

This month I sold nearly 300 copies of WtC, more than 200 at the new price, and cleared $400. Assuming growth in sales remains steady, adding around $100 more a month, in half a year I’ll be getting $1,000/month from my first book (and assuming sales of 500/month is not being wildly optimistic). Taking that out to one year, I will have made more than what would have been my author’s advance on a book doing no more than moderately well by self-publishing standards!

So in the great debate now raging between those advocating self-publishing for first-time authors and those recommending still finding an agent/publisher, I have to go with the first camp. Especially in today’s worsening publishing market, the chances of a first-time author finding a publisher for his book are very small indeed. But more than one self-published author I know has been discovered by the reading public, climbed the charts on Amazon, and then been offered representation or a publishing contract. They put their work out there, put a price on it, and readers saw the value of it. And this is the ultimate validation for any writer.

It’s been a good month.

It turns out I wasn’t optimistic enough–I sold over 900/month last December, and although numbers are now down from that peak, with Villains Inc. out and both books priced at $4.99, I am making between $2,500 and $3,000 a month on my writing. I passed the publisher-advance milestone quite awhile back.