I found my cover-artist on Deviant Art (an art posting site that’s cleaner than it sounds, at least if you engage the adult-filter), and I regularly surf the site for desktops and inspiration. I ran across this charming picture not long after I published Wearing the Cape, and promised myself I’d track the story down one day. This month I learned that Phillip M. Jackson, the artist/writer, had self-published the third comic in the Little Victory: Chimera series, so I ordered them.

Littler Victory is Victory Girl, the newest superhero assigned to police the Gold Sector–basically the Pacific Coast of the US, from Alaska to Mexico. If that sounds like a lot of ground to cover, Victory flies at least Mach 1. She is basically a Superman-Class hero (flight, superstrength, supertoughness, and some kind of energy-projection power). She, and others like her, are raised and educated to be selfless, dedicated protectors of mankind, and she’s all new and shiny, fresh from the facility in Geneva. Naturally, there are local supervillains eager to see just what she can do and insure she doesn’t interfere with their plans.

I cannot stress enough how much I like this story. First, Jolly Jack (as he likes to be known) has created a first-class superhero world. There are hints that the world was already a little weird (among other things, the War of The Worlds apparently happened in real history here), and that those meddling Nazis uncovered Something Big in 1944 (which killed them). Since then a very small number of children around the world have been born possessing incredible superhuman powers. Their births are “noisy”, impossible to miss, and since the Pantheon Treaty of 1955 the Geneva Sanctioned Independent Program has collected, protected, and raised them under the watchful eyes of the world’s governments. When they reach adulthood, Pantheon children go out into the world as sanctioned and heavily supported superheroes.

This solution, while motivated by fear and paranoia, was remarkably utopian and ethically scrupulous. And the Pantheon children are very much needed; cinematic superscience is also populating the world with monsters, enhanced human/animal breeds (chimera), robots, cyborgs, etc. For all the diversity of heroes and villains, however, the source of superhuman powers remains “scientific,” which gives the setting a pleasing, realistic feel.

The characters themselves are very fun, starting with Vicky. A complete newbie (although very well trained and educated), she reminds me of a Certain Superheroine. 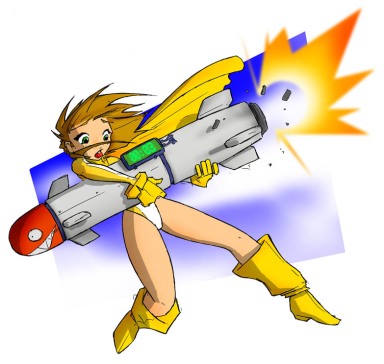 On her first assignment, in a foreign country (San Fransisco, USA), she’s expected to do her job with little direct oversight, and–although she doesn’t know it yet–up against a mastermind with (of course) Evil Intentions. The prologue and first three issues ($3.50 each) are fun, quick reads, and the art is as engaging as the story. I’ll stop now for fear of spoilers, and my only gripe is how long it’s taking Jolly Jack to finish the story-arc! I encourage everyone reading this to run out and buy the comics here ($20.00, including shipping, for all four comics) in hopes that he’ll get off his–  I mean in hopes he’ll prioritize completing the next four issues.

I mean it, Jolly Jack–I want these.

One thought on “Small Victories.”