Agents of Shield and Other Stuff. 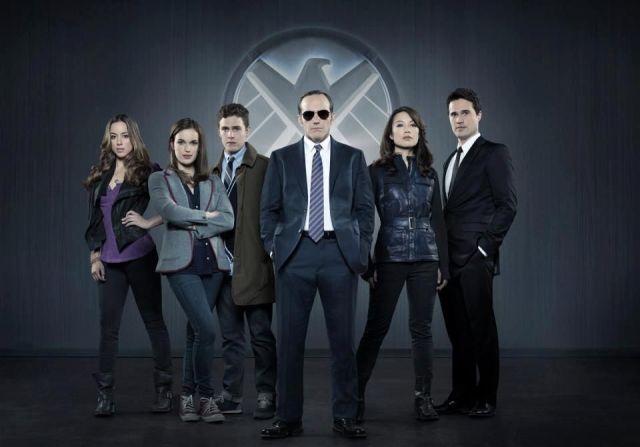 We’re from the government, and we’re here to help you.

When did Men in Ties become sexy?

British experts, hot bone-breakers, and a dead guy: Whedon’s revenge for the cancellation of Angel.

A lot of influences went into Wearing the Cape, but mostly it happened because I was traumatized by Heroes. Don’t get me wrong, I loved the first season; it was Season 2 that killed it for me. After Season 1 I was expecting a breakout of public awareness of the existence of superhumans. I looked forward to sitting back and watching the world come to grips with the reality of superhumans, with all the political and social mess that was sure to follow. Costumed vigilantes and government-sponsored superheroes were just around the corner.

It didn’t go that way.

I revisit this painful memory because Agents of Shield, based on the first episode, looks to be a second chance to get it right. The Marvel Movie Universe (built up over the last seven movies) is unfolding with a pleasing degree of Conservation of Weirdness–all origins are explainable through Superscience and the only exception to that will probably be X-Men style mutation–and the world is changing/adapting in logical and interesting ways. Coulson’s team is one of those adaptations.

How was the first episode? Basic. Not great, not bad, probably all it could be with a single hour to get the team together and have a problem to solve (honestly, two hours would have been better, given the characters time to breath between clever quips, and allowed room for a more nuanced problem-plot). The second episode wasn’t much more involved: a team-building fight over a not-very-interesting MacGuffin that felt like lazy writing.

Part of the problem with being a writer is you lose some of your ability to sit back and just enjoy (or not enjoy) a show. If it drags or feels contrived, your writer’s mind starts spinning out It Could Have Gone This Way… chatter. I’ve learned to shut down my Inner Writer long enough to watch the show undistracted, but I pay for it afterwards.

So I love the basic premise, but think it could have been told lots better. How? I don’t know, how about suspense? Skye is on the trail of rumors of superhumans for her group, Rising Tide. She witnesses the lab explosion and Hooded Guy’s heroic superhuman save, tracks him, warns him, and then gets abducted. From here out POVs begin to multiply, but maintaining ambiguity as to what SHIELD’s intentions are towards her (and just what methods they are willing to use) until midway through the first hour when she meets Coulson–who her sources told her was dead. Coulson “drafts” her by convincing her Hooded Guy constitutes a serious danger, and she helps the team to save him.

In other words, the story they told but principally from Skye’s POV. The viewers would learn the territory the way she does, from the outside in.

Of course it couldn’t be done, because Coulson is the Main Character, not Skye. And this may kill the series. Why? Not because Clark Gregg doesn’t have the acting chops–he does, and Agent Coulson is a perfect example of the role meeting the actor; Clark is Phil Coulson. No, the problem is that Agent Coulson is like Lord Vetinari, the Patrician and benevolent (well, hyper-competent) tyrant of Ank-Morpork.

Vetinari is the ultimate Supporting Character; he Makes Things Happen.  Half the time by motivating others to make things happen so that he doesn’t have to. He’s fun to read, one of my favorite Diskworld characters, and he dominates every scene he is in. But he can’t be a Main Character (at least not without taking away his power or removing him from his power base). Agent Coulson isn’t a good Main Character for the same reason that Atlas didn’t work as MC in my first drafts of Wearing the Cape; he’s too good at what he does, too far along in his character’s meta-arc, not a good way into the world for the reader.

So, is Agents of Shield salvageable? Maybe. It took time for the long-running series Star Trek: The Next Generation to find its feet, and producers will give it more chance than Firefly got because of the movie and marketing tie-ins. And the premise and characters are good. But it’s not Whedon’s best work (compare it to Firefly and Dollhouse’s lead-in episodes).

Disclaimer: the above are the opinions of a four-book author with absolutely zero experience in script-writing for any visual medium.

Also, any bets as to whether SHIELD’s major enemy turns out to be Hydra? And Hydra turns out to be Rising Tide? After all, “if a head is cut off, two more will take its place,” sounds like the perfect metaphor for expansive crowd-sourcing…

So I’ve had my second comic convention, this time the Las Vegas Comic Expo. Not as big an event as the Amazing Las Vegas Comic Con, but a fun show. I was better prepared, with all my books and even some really nice prints of all Victoria Gavrilenko’s covers. I even met a couple of fans who I’d seen at the first convention (failed to recognize them both times–there’s a reason that I didn’t go into teaching after college). One attendee bought a copy of every book and cover print I had, on instructions from a friend in California. There was also a lot to see, including some great cosplay. Here’s my favorite:

She was looking for her dragon.

I sold several sets of books at the expo, and since this is where I meet the fans until I get picked up by a major publisher and start doing book-signing tours, I will continue to do comic conventions in the mountain and Pacific west. I’d like to do some of the big conventions back east, but for those I’d have to fly and ship my books, an expensive proposition. Someday.

So, back to writing. Everyone have a good October.

9 Responses to Agents of Shield and Other Stuff.