First off, thank you everybody who responded to my request for critiques in the last post. I got a lot out of it as well as many of the comments made on Amazon. As you can see from the neat screenshot above, Young Sentinels is doing marvelously–indeed the sustained sales numbers after two weeks are more than I hoped for. It tells me that a lot more readers have been patiently waiting for YS than I had ever expected, and as you can see from the ratings the reaction has been good. Not Knocked Out of The Park good, but good.

On a humorous note, I seem to have sparked an interest in Oz! The Customers Who Bought This Item Also Bought bar on Wearing the Cape is showing this bright green cover… 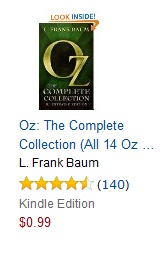 First, the paperback edition of Young Sentinels has been formatted and submitted; everyone who wants to add it to their bookshelves should keep their eyes on Amazon, where it will appear in a few days. I completed the formatting on time to order a box of copies to take with me to the Las Vegas Comics Expo (Sept. 28-29), so I will have all my books at my table and I’m really looking forward to it.

Also, due to your comments I have taken the step of doing a minor edit of Young Sentinels. First, I should have listened to my editor when he suggested that indicating POV with the character symbols might not be enough. Apparently when someone is reading fast the eye tends to skip/ignore anything that’s not actual words. Accordingly, I have gone back over the final draft and put the POV character’s name at the beginning of each chapter and at each scene/POV change inside each chapter. You can see the difference through the “Click to look inside” function on YS’ Amazon page. I have also taken the liberty of adding a sentence to Shelly’s early-story conversation with Mal over hamburgers, foreshadowing her lack of REDACTED REDACTED. Readers were right: I didn’t properly load and prime that particular Chekhov’s Gun.

Since I have uploaded the updated draft to Amazon, it is now available for all readers who have already purchased the book. I have sent KDP notice of the changes and am trying to talk them into sending an email blast to all purchasers to let them know of the update and give them the option of loading it into their archives with the click of a button (doing that wipes all bookmarks and highlights, so it’s not automatic).

Everyone who wants the update immediately can get it by going into the Manage Your Kindle part of your Amazon account and going through Kindle Help (top right part of your screen) to the Contact Us tab. Following the directions will take you to a screen where you can chat/call/email a request. Give the book’s name and ASIN (B00ES4C6WY) and state that the book has been updated and you want the updated edition in your archives. You will get an email response letting you know that updating will wipe all notes and highlights and asking if you’re sure you want to do that. Reply that you are, and in 24 hours you should be able to redownload the book and see the changes. I’ve tested this myself, but let me know if anyone has any trouble.

That’s it for now. Again, thanks everyone! Now I’m going deep into the next book, but may actually be able to post here on subjects other than My Stuff. I hope so.

14 thoughts on “Updates and Stuff…”