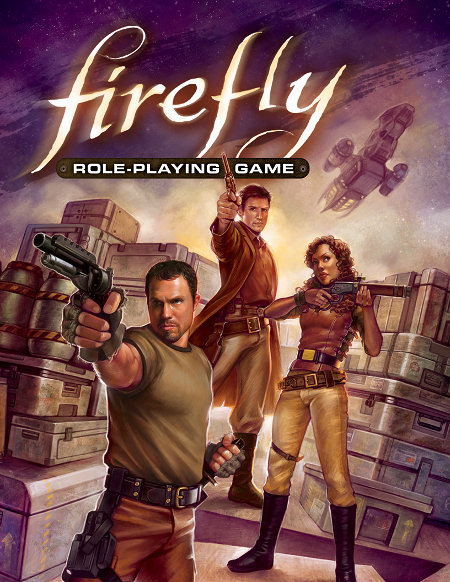 Time for some thrillin’ heroics.

This is my second review in a month, which is something of a record for me lately, but I had to give the Firefly Roleplaying Game a mention. Disclaimer: I don’t play RPGs these days, and haven’t for quite a few years. Alright, basically not since college (lack of hours and a gaming group, really). However, I still buy RPG rulebooks–they are an excellent source of detail and often contain quite a bit of serious discussion on things writers are interested in–like motives, pacing, character development, which guns do more damage… As mentioned before, I used GURPS Supers as a primer when creating the Post-Event setting of my Wearing the Cape series. Which brings me to the Firefly RPG. Am I now writing a wild-west space opera? No. But I am using Cortex Plus–the game system the Firefly RPG is built on. This made for a very good excuse.

First, some background. I encountered Firefly when the series originally premiered, and managed to catch most of the episodes that aired despite the studio’s completely messed-up scheduling. The idea of a wild-west space opera was ridiculous, but Joss Whedon sold it by embracing it and playing it dead-straight serious (a lesson I learned for my own books: if you want the reader to take your story and characters seriously, you’ve got to commit).

And as a history-buff with an unused master’s degree, I instantly recognized what Joss was doing; ignore the sci-fi trappings, and he was telling a story of an America that never was, one with an alternate history.

“What?” you may ask. It’s simple; imagine US history without the Louisiana Purchase–which, along with the later Mexican War, gave the US everything west of the Mississippi. If instead the Louisiana Purchase territory remained a European possession, one almost completely neglected, it would still have been settled by a bunch on land-hungry Yanks–but not under US jurisdiction.

So imagine instead a bunch of state-sized territories that eventually announce their own independence from France, Mexico, and whoever else officially owned the land at the time. Being a bunch of pioneers, cowboys, miners, roughnecks, and generally independent sorts, they have no interest in joining the US (a lot of them moved west to get away from it)–and eventually the US decides that it needs to bring peace and civilization to the truly Wild West beyond its western boarder. And there we have the Alliance vs. the Browncoats.

Naturally the US would win, but it would be a bitter fight and the US government would then be faced with a vast territory it could only police lightly, focusing on core cities. With the primary source of Law and Order being the hated federals, the Wild West would have been much more wild, probably for much longer. They would have been interesting times; maybe I should write a book…

Piào liàng, it sure was shiny. Lit a fire in the minds of a lot of folk, which explains why there was such a fuss when the suits shut it down. It was a dream as real as anything we’d seen, because it was a dream from our own sort-of-past; it connected with the cultural and historical zeitgeist of a legion of self-proclaimed Browncoats. Thus the movie, the comics, the market for all things Firefly that just wouldn’t die. And I have got me some of that.

Which finally brings us to the Firefly RPG. As mentioned elsewhere, Margaret Weiss Productions has displayed an absolute gift for converting fiction properties into games for the fans (Smallville, Leverage, and last year Marvel Heroic Roleplaying). They do it by starting with a very basic core concept (Traits and Dice Pools) and then customizing like crazy to get the exact feel of the stories, characters, and settings they bring to the fans. No two Cortex Plus games are alike. I wanted to see how well MWP managed to translate The ‘Verse into a tabletop roleplaying game, and what it could teach me.

And? Zāo gāo, I need to find me a gaming group. Now. The system is modular, logical, and stays out of the way while you engage in thrillin’ heroics–and is simple enough that different gaming groups can tailor all sorts of house-rules to make it just right for them. And talk about a fire in your mind; the book itself provides so much information about The ‘Verse you start dreaming about it all over again. I recommend it to non-gaming Firefly fans as well as long-time gamers. You can purchase the PDF at Drive-Thru RPG and be breaking atmo’ in a week with your own stories or the stories MWP is providing for you.

So now I have a very high bar to clear if Wearing the Cape: the RPG is going to be anything other than a disappointment. Game on.

Meanwhile, find a crew, find a job, and keep flying.