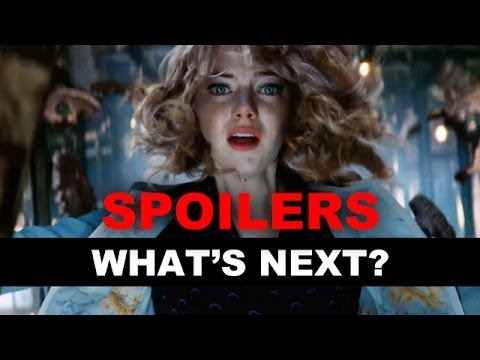 If you don’t know what happens next, go away and come back when you do.

I hope that wasn’t too annoying, but who knows, I might have had a reader who didn’t know that Peter Parker’s first love was Gwen Stacy and that it ended badly. Maybe. Probably not, but stranger things have happened. So, on to my thoughts on Spider Man 2.

First let me say that I enjoyed the movie. Garfield is Peter Parker and Stone is Gwen Stacy, two of the best casting choices in recent Hollywood history. Also, the movie nails Spiderman perfectly; early on we are treated to a plutonium-heist/car chase full of the witty banter and jokes Spiderman is known for, showing us a wall-crawler who has become comfortable with his role. The cops love him, most of the public thinks he’s the Amazing Spiderman, he’s found his groove–at least when the mask is on.

Mask off, not so much; he and Gwen are together but he’s haunted by the ghost of Captain Stacy–to whom you may recall he made a promise to Stay Away From Gwen (for her protection, of course). So also early on in the movie, he breaks up with her. Of course it doesn’t stick. We know how it ends.

Again, I was able to turn off my writer-brain and enjoy the show. But it could have been so much better.

Why? Because although the movie was about Peter and Gwen you could hardly tell because of Everything Else. Follow along with me here. 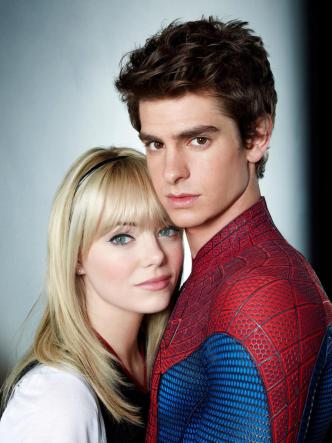 Joking aside, I don’t think that anybody walked into the movie theater not knowing how the story was going to end. The tragedy of Peter Parker and Gwen Stacy is so much a part of the Spiderman mythology that viewers have a much better chance of not knowing that Macbeth dies at the end of the play with his name on it. Which means that everything in the movie was a prologue to that tragic moment, everything afterward an epilogue. But it wasn’t. Which is sad, because they got it right in Spiderman 1.

Spiderman 1 was about Peter getting bit by a spider, yes, but also about Uncle Ben’s death and how it affected all of Peter’s choices, and the beginning of Peter and Gwen’s story; the arc of the movie carried everything along with those three points. It had focus.

Spiderman 2 could have been just as focused. Instead it suffered hugely from three major problems that distracted from the core story.

1.) Too much was going on. The movie opens with a flashback to the day that Peter’s parents left him with Ben and May, revealing that they were going into hiding (not news) and it went bad (news, but not in any way related to the plot). This whole plot-thread seemed to exist to add an unneeded layer of angst for Peter and reveal that the gene-spliced spider that bit Peter actually had Parker DNA in it. And even that bit of information wasn’t vital to the plot.

On top of the Dr. Parker business, the movie introduced Electro; which of course required a separate origin-arc. Electro was pretty cool, even if his whole “The world ignored me, now I’m going to make it pay attention.” motivation was cliched. But it was Too Much; every second of Electro screen time detracted from the introduction of the important villain… The Goblin.

2.) By whom I mean Harry Osborne, of course. Wasting time on Electro completely shorted the Peter/Harry arc. In the reboot, we never heard about Harry because shortly after Peter’s parents disappeared Harry got shipped off to boarding school and the two formerly inseparable boys were separated. This is completely believable, in light of Peter’s father being Oscorp’s top scientist and close friends with Harry’s dad.

Absent Electro, the movie (140+ minutes long) would have had plenty of time to actually build a believable and heartfelt relationship between Peter and Harry before it all goes bad. As it is, we are given no time to invest emotionally in Harry before he descends to ranting and cackling; we never buy Peter’s conflict over deciding not to help Harry either (learning that Oscorp had intended to weaponize his father’s research made a poor motivation even more poorly explored). Just as the first movie’s relationship arcs were Peter/Ben and Peter/Gwen, the second movie’s relationship arcs should have been Peter/Harry and Peter/Gwen, but there was no time for any of this. Which brings us to problem three.

3.) Gwen Stacy must die. I loved the new Gwen. Marvel/Hollywood did a marvelous job of updating her into a strong female character. If anything, she is smarter than Peter–certainly she played a pivotal role in both movies instead of being a mere Damsel in Distress. This movie should have been about the natural changes in her and Peter’s relationships as they graduate and she gets the Oxford scholarship; all by itself, this would have presented Peter with the question of whether he should stay and be Spiderman or go to England with Gwen.

Instead, with the clock ticking down to Gwen’s fateful end, we are presented with a retread of their relationship conflict from the previous movie–a ship that had already sailed. The do-over burned large blocks of valuable movie time that could have given us heartwarming scenes allowing us to experience their relationship (you know, when they weren’t fighting each other or saving the city). As it was, we never really got a chance to see them being good for each other; in the end, I was underwhelmed by her death and detached from Peter’s loss.

What would I have done differently?

First reduce Electro to an already-there villain who Spiderman fights once to give us a good action scene and showcase E’s powers before he is sprung by the Goblin (and maybe display Peter’s concern for Gwen’s safety).  Reduce the Dr. Parker thread so we can devote more time to Peter and Gwen (and drop the whole “We can’t be together.” fight). Use the freed up time to give us more Peter/Gwen and beef up Harry Osborn’s role tremendously.

Yes, this covers ground already gone over in the Toby McGuire movies, but cutting Harry’s arc to next to nothing deprived us of a beautiful possibility: Harry renews his friendship with Peter, even strikes up a surprising (and platonic) friendship with Gwen, showing us his own humanity (maybe he pulled some family strings to get her into the running for the Oxford scholarship, thus precipitating that relationship crisis). Then he finds out that Peter has research notes that might be able to help him but won’t, even figures out he’s Spiderman. Desperate, he injects himself with the spider-venom, mutates, and his anger at Peter turns into insane hatred. He attacks Peter as Spiderman, kills Gwen Stacy, and then regains his sanity.

And here is the lost opportunity at the end of the movie: we already knew that Gwen Stacy was going to die, and that it would devastate Peter but he wouldn’t stop being Spiderman. But what if it also devastated Harry? The final scene might have been, after spending six months standing over Gwen’s grave and then coming out of retirement to pound the Rhino, Peter visiting Harry in prison on one of Harry’s good days. To forgive him.

That would have been a final scene worth seeing, a step forward for Peter–forgiving his friend and by doing that coming full circle, accepting that he should forgive himself for his part in Uncle Ben’s death. Camera fade, The End.

And that’s why it was a fun movie but not a great movie. Better luck next time.