The Trials of Constantine

Well that was disappointing…

So, I recorded and watched the pilot episode of Constantine, after looking forward to it for months. All I can say is… Meh. Which is too bad; so far this season, DC had been batting pretty good. The Flash got off to a good start, and so did Gotham. I had high hopes. So what went wrong?

Okay, well first off Constantine just didn’t scare me. For all the occult and horror elements, it feels pitched as an action-show. By that I mean that the main character is on top of things and doesn’t come across like he’s skating on the edge of disaster at all. He’s not worried, so I’m not worried.

Oh, you say, but he’s tormented. Nope, not that either. Sure he checked himself into an insane asylum hoping that professionals could drive him insane enough to forget. But he never feels actually, you know, driven enough to check himself into an asylum and have volts shot through his brain.

Then there’s his co-star, Beth? Oh yeah, Liv–I remember because of the blood and cockroaches. She goes from “This can’t be real!” to “Okay, this is real and I can trust this guy with no razor and a trench-coat,” in about two scenes. Um, okay.

At least he looks like John Constantine? A valid point, given that the last one looked like this:

But here’s the thing: say what you will about Keanu Reeves’ range as an actor, he was note-perfect in the movie. Sure, he acted like a depressed, don’t-give-a-flying-*** burnout who was racking up exorcisms to try to win his way into Heaven, but in the end he fought because somebody had to and at no point did he act like he thought he was actually going to win; he fought because it pissed him off to let the Bad Guys win without a fight. And in the end he showed he had a soul by passing on Satan’s offer of more time, asking instead to spend the favor on getting an innocent woman out of Hell.

Which brings us to Astra (funny coincidence on the name…). This Constantine’s mistake damned her to hell, and himself, but it was his mistake. He check himself into the loony bin hoping to forget that what he’d done and what is waiting for him. So when talking to an angel, does he ask if there’s any hope of saving Astra? Nope, it’s all about him. At that moment the character absolutely lost me; every move he makes is completely selfish (yes, I know that’s Constantine, but you have to give a main character some redemptive trait or the reader can’t connect with him at all).

Last gripe: it didn’t help that every time Constantine said something, I imagined the same line being spoken by this man: 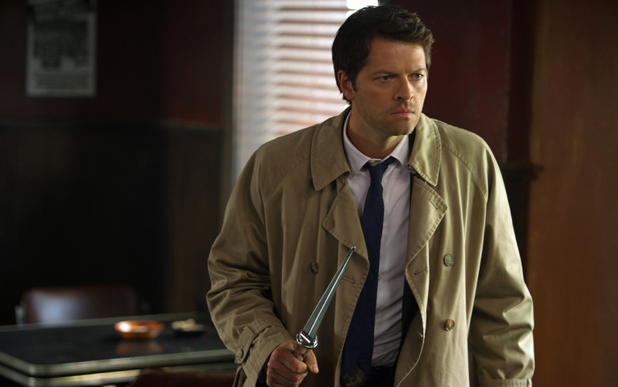 And guess what? Misha Collins does it better.

Enough of the gripes: how would I fix it if I had a time machine? After all, a few writers read this blog and might be curious as to what I think would have helped.

First, Supernatural already did all this, and better, so look at that show’s early seasons. The Winchester boys always acted like, as mad-prepared as they were, they were never more than just one step ahead of “ending bloody” (Dean’s nice phrase).

Second, the main character, at least of the pilot and the first few episodes, should have been Liv. We should have seen it through her eyes as her world went crazy and this scruffy and mysterious guy shows up. Pile on the atmosphere, the suspense, the shrieking I’m Going To Die moments followed by the What The Hell Was That breakdown moments. The story of Constantine’s failure and damnation and what-the-Hell approach to life should have been dragged out of him over a bottle. With the hint at the end, in John’s Touched By an Angel moment, that he might be able to save Astra and it involves keeping Liv alive and sane.

Oh yeah; and hire Misha Collins. Somebody’s already taken away his razor and issued him the trench-coat.

I am a reasonably successful self-published author ("successful" means I can pay the bills and am highly rated in my Amazon category), former financial advisor (writing is more fun), and have something in common with Mitt Romney and Donny Osmond. Guess.
View all posts by George →
This entry was posted in TV Reviews and tagged Comics, Constantine, reviews., Supernatural, TV Shows. Bookmark the permalink.

4 Responses to The Trials of Constantine