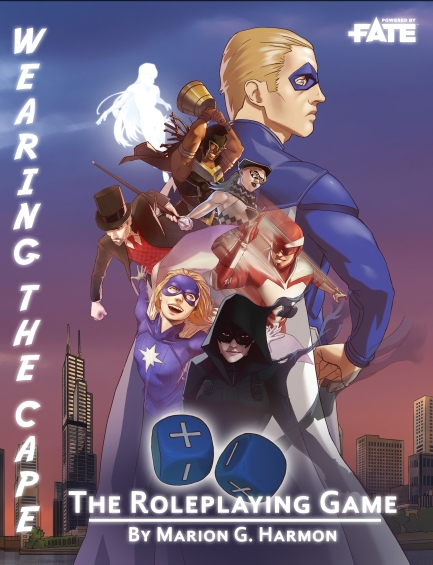 Longest project I’ve ever worked on.

So this is it. Crossing my fingers and praying there are no other obstacles, the Kickstarter Campaign for Wearing the Cape: The Roleplaying Game will launch February 1st. It’s been a long, long road.

So what to say about it?

First off, I can’t believe it’s finished. Now that the production phase of the project is complete, I can confidently say that, if I’d known just how much would be involved in making the game a reality, I wouldn’t have done it. I’d have paid someone else to do it.

First off, there’s the art.

I thought I knew what I was doing there. After all, I’d been good at finding great cover artists, right? Not just once, with my discovery of Viktoria Gavrilenko, but twice, the second being Jamal Campbell. Well…

The art has wound up being mostly the work of four artists, with another two thrown in. All of them good, but all of them having to wait upon my art direction. After all, none of them were psychic. Also, only one of the main four artists (Jamal), was a superhero artist (he now does lots and lots of comic covers for Marvel and Boom, the reason I needed to bring on more artists). It all still turned out pretty darn good, though; Kasia and Christopher picked it up to to marvelous work. Here’s a sample:

I told myself at the beginning of the project that I wasn’t going to settle for less than great art, and I didn’t. I wish there was more of it, but then the gamebook still wouldn’t be finished. And if there’s one thing I’ve learned in five years of self-publishing, sooner or later you’ve just got to get it done.

Aside from the art, my biggest obstacle with WtC:RPG had been the system itself. I was not about to try and design a whole new RPG system from scratch. “Darn it, Jim! I’m a writer, not a game designer!” You may remember, a couple of years ago, I thought we had it nailed with the Cortex+ system, a “universal” system used by Margaret Weis Productions. They caught my attention with the Firefly RPG and, even more impressively, Marvel Heroic Roleplaying. It looked perfect, and I corresponded with them before throwing together a gamebook for their approval.

Then I learned that MWP would not allow me to do a stand-alone gamebook; we could only produce a Wearing the Cape Sourcebook for use with their Heroic Roleplaying system. That might have worked, but they never published the core system—it was always “coming soon.” (As an update to that, MWP has recently licensed the Cortex System to Cam Banks, who is an excellent game designer, for further development. Good for them; if they do great things with it—which I expect—then there may yet be a Cortex System gamebook for Wearing the Cape in the future.)

But all that work wasn’t totally wasted; I had the world-background stuff written, and I just had to find another system. I found it in the Fate Core system.

Fate Core is in many ways a foundational system that inspired specific parts of the Cortex+ system. The great news with Fate Core is that unlike Cortex, it is a fully open-source system; I was able to make the complete and stand-alone gamebook I wanted with it.

Now I just needed to learn a new game system.

One that was completely different from any tabletop RPG I’d previously played.

So, no problem. I read, reread, and re-reread obsessively, picking up several of Evil Hat’s worked gamebooks to see how the Fate system worked out in a developed setting. I joined Fate Core’s Google+ community and asked lots of questions before starting to answer questions from other newbies. Comparing my answers to the answers of Fate veterans was a great way to see if I’d gotten it right—sort of like answering essay questions in school. And I pulled together not one round of playtesting but two, with gamers who’d played with Fate before, as well as gamers who, like me, hadn’t even heard of the system before playtesting began. They helped a lot.

The end result of it all is a game system that isn’t quite Fate Core. Call it Fate Core Compatible. There were a couple of things I wanted to do that Evil Hat’s excellent system didn’t quite stretch to, but fans of Fate Core will have no trouble with it—or with dropping my little additions and playing it with straight-up Fate Core if they want to.

And it’s finished. I can’t tell you how amazing that feels.

So, what about the Kickstarter Campaign? How does that work, and why am I doing one? Kickstarters are normally for selling an idea and convincing backers to pledge money so that you can make a game or whatever it is you want to produce, and my production costs are behind me, right?

I have produced the gamebook on a pay-as-I-go basis, which means that the development and art is paid for. It’s all sunk costs now. But to fund the print run of the quality hardback gamebook, now that’s another story. Basically, to pay for a print run of sufficient size to be economical, I need to scrape together another $10,000.

To do that, I’m offering a little extra for fans who want to help. The electronic edition of the gamebook will be a reward for backers who pledge at least $19 to help make it all happen. (After the Kickstarter Campaign is over, successful or not, the electronic edition will be available for purchase through DriveThru RPG for $25.) Fans who want the beautiful hardback printing of the gamebook will be able to get it (together with the electronic edition) as a reward for pledging $59 or more to the cause. Anyone who wants to go a little crazy can pledge more for some cool custom dice (see previous blog posts for pictures of those, they were a lot of fun to design).

And then there is the reward connected with Wearing the Cape: Barlow’s Guide to Superhumans (see the Dec. 3 post). Because nothing says “thank you!” quite like making you part of my world. That’s going to be a lot of fun. Seriously; growing up, I used to create my own personal characters to adventure in the worlds I most enjoyed. Just in my imagination, quite apart from the roleplaying games I so much enjoyed. Middle Earth. Narnia. The comics. Later the Honorverse and Vorkosiganverse. That’s how I learned character-creation and plotting. It will be interesting to see what others do with my own world.

So the campaign launches in nine days. What can you do to help?

Naturally I hope everybody who follows my blog wants something in the campaign enough to make a pledge. But also, these Kickstarter campaigns succeed or fail by word-of-mouth, so I hope that everyone who’s as excited about this as I am will spread the word wide. Link to the campaign on Facebook. Tell their friends about it. Get the word out that there’s a new, awesome, tabletop superhero RPG in town.

Because it is awesome. I’m sure I’m biased, just a bit, but I think that everyone who has been patiently waiting is going to be amazed.

I’ll see you there.

I am a reasonably successful self-published author ("successful" means I can pay the bills and am highly rated in my Amazon category), former financial advisor (writing is more fun), and have something in common with Mitt Romney and Donny Osmond. Guess.
View all posts by George →
This entry was posted in Uncategorized and tagged Fate Core, Kickstarter, roleplaying games, Wearing the Cape: The Roleplaying Game. Bookmark the permalink.

9 Responses to We Have Launch.