Hashtag Activism and The Modern Mob.

Is being radically moderate the same as being moderately radical? In any case, I feel impelled to put on my Radical Moderate hat again. Not to say anything radical and new, just to again register my dismay at what Hashtag Activism is doing to our society and conversations.

Hashtag activism: A term coined by media outlets which refers to the use of Twitter’s hashtags for Internet activism. The term can also be used to refer to the act of showing support for a cause through a like, share, etc. on any social media platform, such as Facebook, Google+, or Twitter.

Two incidents brought this back to mind. One, the Incident At The Capitol Mall (you know, the one with the Catholic teens and the Native American elder) is still churning Twitter, Facebook, and many, many professional media platforms. More on that in a moment, but I’ll talk about the other incident first.

Earlier this month, a Chicago woman was assaulted by a young man in an attempted mugging. He approached her while she was waiting alone for the bus in the early morning, brandishing a gun. The police report is short on concrete details, but it makes it clear that 1) there was a struggle, 2) the woman was also armed and she drew her own gun, 3) she shot her attacker in the neck, 4) he took her gun from her, but 5) fled the scene. The young man was apprehended only a few blocks away, and taken to the hospital where he died of his injury.

The incident was picked up by a local news channel. Locals were interviewed. It seems the area is known for its assaults and shootings, and the neighborhood response was pretty much “She did what she had to do. Good for her.”

That probably would have been the end of it, except that a few conservative voices online took note of this woman successfully protecting herself by exercising her 2nd Amendment Rights and gave her kudos for it. Cue Zack Ford, an editor for Think Progress.

Zack is very “anti-proliferation”; we know because he says so.

For context, his philosophy of anti-proliferation is basically that it’s a bad idea for civilians to arm themselves because the criminals are armed. That just puts more guns out there, which is bad. Call it the neighborhood version of nuclear anti-proliferation.

Anyway, Zack took a look at the story and the conservative response, and fired off this sage hot-take:

But although Dailycaller.com expressed satisfaction at the assaulted woman’s successful self-defense, it didn’t dance a jig over the death of her assailant. It simply reported “A 25-year-old Chicago woman with a concealed carry license shot and killed a man who attempted to rob her at gunpoint last week.” It also reported one of the interviewed local’s responses. ““It’s tragic that he did die, but the lady had to do what she had to do,” Bianca Daniel, a local resident, said about the bus stop incident. “I’m kinda of proud that, like, that’s what she did because she stuck up for herself.””

I’m sure a bunch of reader comments were less restrained, which is of course part of the problem. But Zack probably felt pretty righteous about his own tweet, until the numbers on his twitter-feedback started dipping very negative indeed. Also, while he got the expected indignation from conservatives, he also got a lot of push-back from liberals, followers on the left, the Good Guys, whose response was pretty much “Wait, what?”

So he tried to clarify his position:

For some reason this line of progressive logic didn’t make Zack’s twitter followers any happier and as the criticism deepened he continued to make his case:

And anyway, her successful resistance led to praise for gun ownership, which is bad because, proliferation?

For some reason, this didn’t help. Finally, Zack took down his original tweet and put this up: 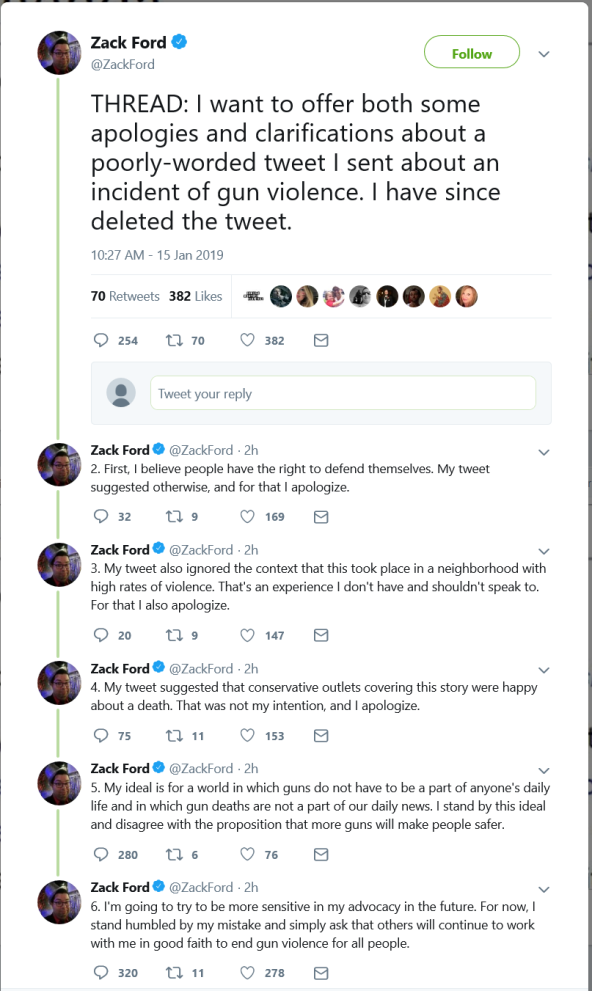 Now, we can debate Zack’s line of reasoning all we like, but I think one thing clear from all this is the sheer stupidity of trying to intelligently debate anything on Twitter. Zack’s big mistake was two-fold. First, although you “tweet to your community” your tweets, once made, can and will go anywhere. Others will see them. They can respond. Their responses can very easily derail your pithy point if it’s even a little shaky. Even those who agree with you in general might see reasonable disagreement (fortunately for you, most tweeters aren’t more reasonable and restrained than you, but still, it’s a risk).

Second, you’re absolutely stuck with your original statements, however ill considered. You can try and spin them, but you can’t unsay them. The bit that made me laugh out loud was his first apology statement “I believe people have the right to defend themselves. My tweet suggested otherwise, and for that I apologize.” It’s very clear from his initial and follow-up statements that he does think that, while she might have had the right to defend herself, she didn’t have a right to defend herself with a gun. (Unless of course, he believes she has the right but shouldn’t have exercised it because proliferation. Or something.)

In other words, once you be-clown yourself on Twitter (or Facebook or online in general), it’s impossible to recover your credibility. Your stupidity is forever. To quote the Goblin King, “What’s said is said.”

Of course while Zack felt the heat, I’m sure he was only moderately mobbed. Actually, by today’s standards it wasn’t a mobbing, just a “What the f–?” cascade. But it certainly didn’t contribute to a thoughtful discussion of the right of self defense.

Since this blog’s getting a bit long, I won’t describe The Incident at The Capitol Mall or its media aftermath. If you don’t know what I’m talking about and want the history, go here.

Or you can do your own research; I like Reason.com because I’m an Independent and while I don’t agree with them on every issue they don’t usually parrot the spin of the Right or Left. The point is, when the Reason.com reporter wrote “Partial video footage of students from a Catholic high school allegedly harassing a Native American veteran after the anti-abortion March for Life rally in Washington, D.C., over the weekend quickly went viral, provoking widespread condemnation of the kids on social media.” he wasn’t kidding. Doxing and death-threats were made. It seemed like half the social media users in the country engaged in a perfect storm of Two Minutes Hate.

For those unfamiliar with the reference, “the Two Minutes Hate, from George Orwell’s novel Nineteen Eighty-Four, is a daily period in which Party members of the society of Oceania must watch a film depicting the Party’s enemies and express their hatred for them for exactly two minutes.”

Everybody jumped on the kids. If you were on the left, you piled on because, well, what they did was hateful. If you were on the right, you did it because if  you didn’t utterly condemn their horrible, horrible, actions, then you were part of the problem. Or something. And it was social media, not government, that instigated this Two Minutes Hate. Orwell would never have seen that coming. Or possibly he would.

Then more video was released and . . . great, we all just condemned, abused, threatened, and generally horribly bullied a bunch of high school boys for . . . what? A huge number of pundits, bloggers, tweeters, journalists, and celebrities are now trying to walk back their Two Minute Hate. But a lot of other people are seeing the whole “Look! MAGA hats! White boys! In a chanting crowd! Horrible!” response and the stupidity of it all and it’s yet one more, forever-to-be-remembered pile-on by the social media mob.

So, two examples of hashtag activism gone horribly wrong, one small and one large. I’m sure everyone can think of their own examples, recent and receding, buried under the latest pile-on but always to be remembered when one side or the other needs a “how awful” club to swing at the other.

This is why I don’t tweet, and why I don’t usually respond to an “incident” on Facebook until more information comes out. Because I’m human, I do have firm opinions, and sooner or later I’ll be-clown myself.

I am a reasonably successful self-published author ("successful" means I can pay the bills and am highly rated in my Amazon category), former financial advisor (writing is more fun), and have something in common with Mitt Romney and Donny Osmond. Guess.
View all posts by George →
This entry was posted in The Radical Moderate, Uncategorized. Bookmark the permalink.

15 Responses to Hashtag Activism and The Modern Mob.