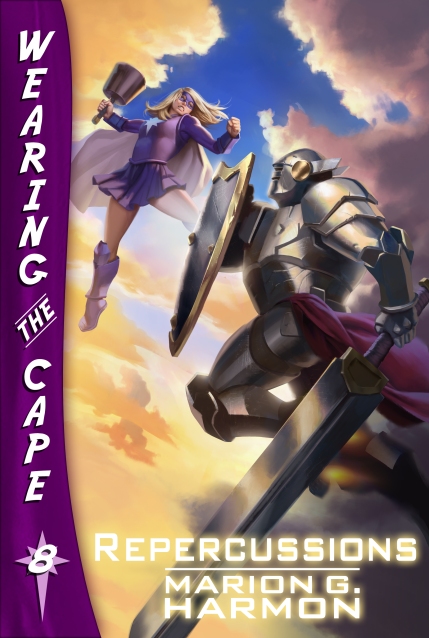 The 8th WtC book took over a year to write. In my defense I was distracted by getting the last details finished and the Barlow’s Guide & The B-Files sourcebook out the door early in the year. It’s a weak defense, but I’ll take what I can get.

A stronger reason for the delay this year is that Repercussions is a pivotal book. Ronin Games, Team-Ups & Crossovers, and Recursion all had plots that advanced Hope/Astra’s personal character arc (plus were a lot of fun to write), but didn’t move things along in regards to the Big Picture very much. Repercussions, on the other hand, most certainly has (it’s sort of in the name).  It’s also upped the ante on the Big Questions behind the Post-Event World.

What Big Questions, I hear you ask?

The biggest. No less than What The Heck Is Going On?

To illuminate, waaaaaay back in Small Town Heroes, I intimated that future-humanity had yet to encounter any actual aliens (and dismissed self-proclaimed aliens like the Servitor of Ganymede as delusional breakthroughs). In Ronin Games, I used the excuse of a conversation with the Warden of The West to introduce two science/science-fiction concepts; one was a flirtation with Plasma Cosmology (look it up sometime, it’s fascinating fringe science), and “. . . against all predictions, in a century of looking, listening, and searching no life would be found anywhere else in the Universe. Future theories would include abiogenesis as a cosmically unique event, colonization from another universe (maybe an extrareality more real than we’d thought), and Intelligent Design.”

I did all that with serious malice aforthought, a method to my madness. This is because the Wearing the Cape stories have always been a deconstruction-reconstruction of superhero tropes. One of the oldest tropes of the superhero genre is to throw in everything, all fantasy and elemements equally valid. Also all sci-fi elements. The result is a world including sorcery and superscience, gods and aliens, and being threatened by would-be alien overlords and ancient Atlantians at least once a year.

It’s easy to understand how this happened; the instant comics creators realized that Superman and Batman fans would love to see them team up Gotham became part of the same world as Metropolis (in some “settings” they’ve been right across the river from each other). As other heroes came along, it didn’t matter what their reality implied (or outright claimed) for the wider universe–the more the merrier! Before the Golden Age ended, you had Superman (alien), Green Lantern (mystical), Hawkman (reincarnated plus superscience), Wonder Woman (semi-divine), and the Flash (science accident) all on the same team. Don’t get me started with Martian Manhunter, Zatanna, the Phantom Stranger, etc.

Don’t get me wrong; I loved it. Still do. But . . . at least five different “magic systems”, three takes on time-travel, four ways of getting around the Speed of Light Limit, ancient advanced civilizations, more alien species than stars, etc. And, this being the impossible part, none of the revelations of any of this having any sort of real impact on society.

In the Real World, if Superman showed up then NASA’s budget would get more than the entire US Military and we’d be out conquering our Solar System and launching interstellar probes within a decade. (And Lex Luthor would have a serious following.) In the Real World if persons displaying verifiable magic powers showed up we’d have an explosion of New Age mysticism and religious traditionalism. In the Real World, the development of anti-gravity, teleportation, artificial intelligence, etc., would be agressively monotized and capitalized. In the Real World, if Wonder Woman showed up with a message from the Greek Gods to share with Man’s World . . . yeah.

And so on. You get the idea. Kitchen Sink + Status Quo.

So with the Post-Event World, I set myself the task of having all those wonderful kinds of heroes, without breaking social realism while maintaining the Status Quo. And it worked. At first. At first there was Artemis; a vampire-but-not-really-a-vampire, created by a psychotic breakthrough’s obsession. And there was Vulcan and Verne-Types who could only make superscience work when they built the stuff; obviously breakthroughs. And there was Dr. Cornelius and Hecate; delusional mystic breakthroughs. Again, you get the idea.

And then the idea began to feel a little too small. When I created the Young Sentinels, I’d originally intended their mystic-hero to be a cheerful, even ditzy, witch. With a pointy hat, wand, broom, everything (obviously inspired by reading a Series of Books About A Humorously Named Magic School). A running gag was to have been that she’d drive Vulcan crazy. She didn’t feel big enough.

She was perfect. Huge back-story, public domain, a whole world and mythology of her own. Working right from her own history, a marvelous reason for her to be here, in the Real World. She became my magical version of Superman, Last Son of Krypton. And of course everyone who knows of her thinks she’s just another delusional breakthrough–in this case probably a teen who suffered a severe psychotic break with reality.

Yeah, a delusional teen whose powers included the ability to imagine artifacts of great power, scattered around the globe, waiting for her to find and use them.

Now that’s a new level of personal reality-shaping, if that’s what’s going on.

And then in Ronin Games I dropped Hope and her posse into a contest refereed by an extrareality being with cosmic powers, and then into some kind of spiritual plane.

Umm. Let’s fix this with a cross-reality roadtrip through alternate timelines, mythic realms, a couple more superhero realities, and a television series.

Yeah . . . I sort of blew up my universe. As in expanded it explosively.

Worse, I made the mistake of firmly establishing that Oz itself existed (and whether it exists independently or due to Ozma creating a whole realm from her delusion doesn’t matter).

At least I had the forsight in Team-Ups and Crossovers to give a kinda-sorta scientific rational for the existence of alternate histories and fantasy worlds: the whole Infinitude and Stage I and State II realities business.

And this has all led to an Important Encounter that Hope has in Brussels, back to Big Questions and What The Heck Is Going On? And to the invasion of Oz.

I did not see that coming.

And that’s a big part of why Repercussions was late. Believe it or not, I do know what’s going on, why everything has happened. But I don’t know everything that’s going to happen anymore. I know the general destination. I’m still feeling my way through the new geography between here and there, though. And the Post-Event World is changing, the Status Quo shifting, sliding. Exciting times.

I can’t wait to see what happens next.

BTW: on this first day of Book 8’s release, more than 150 have been sold (might break 200, there’s still a few hours in the day). Thanks, everyone, for waiting patiently and now spreading the news. I can’t wait to see the first Amazon revies and all of your comments here.

24 thoughts on “And Then There Were Eight”