Once upon a time, women in stories were pretty much there to be rescued. But in the 20th Century, woman went from being man’s “helpmeet” to being man’s partner (the details are still being discussed, but at least in our part of the world the new arrangement has been pretty much universally accepted). Let’s look at what this has done to women in fiction, beginning with the old trope, Damsel In Distress.

See a scene like this in the old days and you know that shortly the Good Guy is going to come riding to the rescue. How old is this trope? 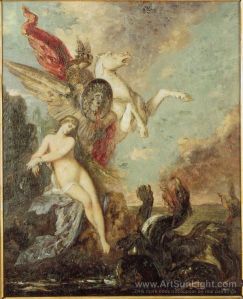 For those of you who didn’t geek-out on Bullfinch’s Mythology, those two are Perseus and Andromeda, and yes, she’s chained to a rock being threatened by a dragon. Trains were considered progress.

The medieval code of chivalry made the protection of distressed damsels part of the knight’s job-description. There were actually a couple of legendary female knights, but even they posed problems. The smart, strong females in Shakespeare’s best plays were only the equals of their male counterparts when they cross-dressed and took on men’s roles. But as the 20th Century matured, the dramatic roles available to women began to change. Independent Woman and Liberated Woman was followed by Strong Woman. Wonder Woman appeared in the middle of this cultural transformation. 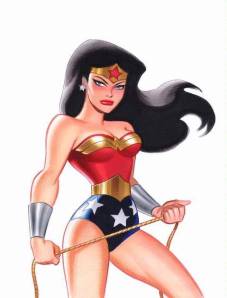 The product of an all-female society that for some reason still evolved high heels and bustiers, a warrior-woman capable of kicking serious posterior, Wonder Woman proved to be very capable of saving herself, thank you.

And she had to, because she still got captured. A lot. 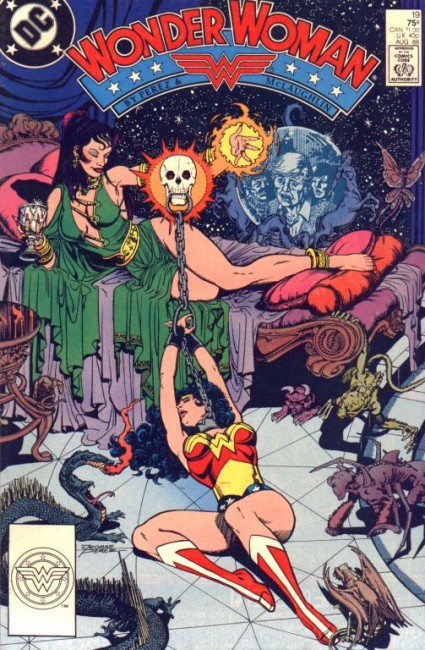 Didn’t this bother any of the editors?

But you can bet that in this comic she rescues herself; the Designated Male Hero has disappeared from the story–in fact readers would find him unwelcome. With her superpowers, Wonder Woman didn’t need guns, but in many ways she was the first popular Gun Girl. She paved the way for other comic-book superheroines, although few of them have had their own title and none have become pop-icons.

Everyone knows the next big Gun Girl pop-icon.

Again, no guns involved, but the attitude was there. Interestingly, Buffy was played as a girl who just wanted to have fun; hanging at Sunnydale’s excuse for a mall, trying out for the cheerleading team, and clubbing, insofar as teens can, were higher on her to-do list than vampire slayage. But a reluctant hero is still a hero, and over the years she developed into the leader of her own little superteam and then her own little army.

Since Buffy’s appearance, Gun Girls have come into their own at the movies and on TV. Sometimes they’re played as campy fun, but the dangerous abilities of main female characters are now assumed in any action drama.  No superpowers necessary.

Pick out the most dangerous person in this lineup.

Which brings us to the present, and the ultimate evolution of the Gun Girl. Back in the 80’s a woman appeared in a grade-B action movie that involved a Distressed Damsel, a Designated Male Hero, and a Bad Robot that spent the entire movie trying to kill her. I speak of course of Terminator and Sarah Connor. The show was a hit and a sequel was ordered, but something happened to Sarah Connor between movies 1 and 2. Nobody was going to mess with her son, and when we saw her again, she was a Gun Girl.  She eventually got her own (sadly short-lived) TV show.

Just how badass a Gun Girl is Sarah Connor? She kept her son safe, taught him all the skills he’d need to Save All Mankind when Skynet took over–then decided to stop Skynet herself so he wouldn’t have to.  She’s a Gun Girl for the 21st Century, and as far from Andromeda chained to a rock as it is possible to get.

6 thoughts on “Wonder Women, Part 2: From Damsels In Distress To Chicks With Guns.”