There is something about a real book that feels more, well, real. Today my first box of Villains Inc. trade paperbacks arrived, and they look awesome. Two are going on display at Alternate Reality Comics, the store that provides me with my comic-book fix, one is going to Viktoria Gavrilenko, my most excellent cover artist, and one is going on my bookshelf for me to see whenever I doubt I’m really a writer. 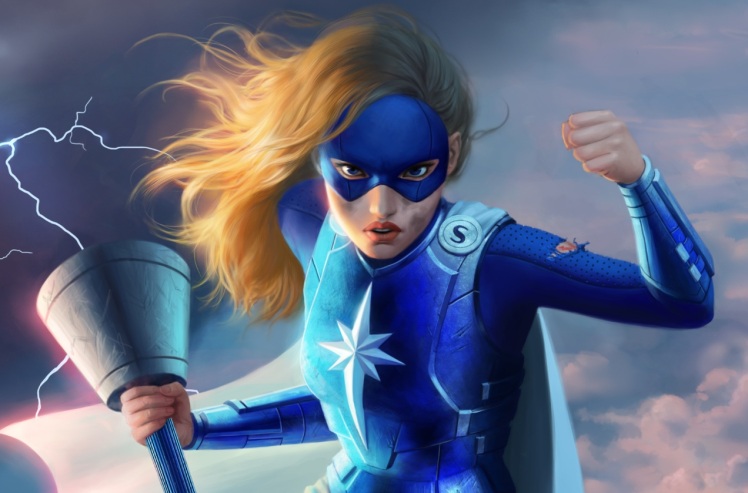 BTW, for all those Astra fans who already purchased the book and want the new cover, you can contact Amazon.com and arrange for them to replace the old edition with the new one in your Kindle archives, then re-download it!

Actually, just looking at the new cover made me think about Astra’s character and how she’s changed. I believe I’ve mentioned it before, but in many ways Hope/Astra was an accidental character; the original WtC drafts had Atlas as the POV character. A weary and somewhat cynical version of Superman, he’d been fighting the good fight for too long and was about ready to hang it up. Astra appeared as a young, idealistic foil for his character, and the story was all about him recapturing his earlier idealism in the course of training this newbie.

And it didn’t go anywhere. First, it was nearly impossible for me to feed the reader the details of the post-Event world in any natural way. After all, Atlas already knew all about it; some of it he could explain to Astra, but most of it came across as obvious info-dumps. Second, Atlas was too good at his job; I’d set him up as the world’s premier hero, and then found it impossible to challenge him without breaking something. I’m sure a more experienced writer could have handled him better.

But Astra was in a different situation. Starting at the bottom of the learning curve, for her nearly everything was new and overwhelming. I’d initially made her a bit older, a college fourth-year instead of a college first-year, and she originally resembled Megan (the snarkier of the Bees), but once I decided to use her as the POV character she became progressively younger and more innocent to better mirror Atlas’ character traits.

Which made fleshing out Hope’s character an interesting balancing act. I knew what I didn’t want: the stereotypical angst-ridden teen. For one thing, any teen who gains The Coolest Powers Ever is likely to be very annoying if they cry about it too much (see Angst Dissonance and Cursed with Awesome at TV Tropes). I also discarded some of the more obvious teen tropes: the Emo Teen, the Brat, and the Pollyanna. I decided to make her a budding Plucky Girl, since sheer determination seems to be a basic job-requirement for true superheroes (as opposed to media superheroes), but tried to steer clear of the kind of hyper-competence  or Good Golly niceness that creates a Mary Sue.

Results have varied. One reviewer complained of a lack of edginess or dark undercurrents. Another found Hope to be a kind of “wish fulfillment,” by which I assume he meant she was too perfect and her background was too privileged. Another thought there were far more interesting characters he would have liked to read about, and quite a few readers have expressed a preference for Artemis! (I can certainly understand this last bit–Artemis started out as a stock Dark Vigilante, an angry Action Girl, but her back-story captured my imagination and her more blunt personality is fun to write.) Another reviewer found Hope refreshingly down-to-Earth and a nice change.

Still, in many ways, Wearing the Cape is as much about the post-Event world as it is about Hope (one of my sisters called the setting the main character). This has led me to worry that Hope may not be a strong enough character to continue to carry the story once the newness of her world has worn off with the readers.

Which brings me back to the cover-art and what it says about Astra. In WtC, although she had her proactive moments, Hope/Astra was mainly reactive. And this was okay–she was just starting out, and towards the end she certainly took the initiative (with ambiguous results). VI, on the other hand, was largely about the fallout from WtC; Hope experiences some character growth–unsubtly symbolized by her many costume-changes–and she does end the second story-arc in a happier place, but other characters experience much greater transformations. I would hate to think that Hope/Astra is “complete” as a character–after all, she’s only nineteen–and I don’t want to simply churn out a series of adventures that have little or no effect on her from here on, but it’s hard to see a creative way forward from here.

Fortunately, I have a while to think on it; I’ve decided to return to the Wearing the Cape books after finishing Bite Me, but for now I can let thoughts of Hope’s story wait. Often inspiration strikes while you’re thinking of someone else. Meanwhile, I’d love to hear what readers of WtC and VI think of Hope/Astra as a character–past, present, and possible future. I have also decided to hold another drawing.

I got a lot of good feedback on the first drawing, and I have an extra Villains Inc. copy sitting on my shelf, so…

Anyone who has not yet posted reviews of Wearing the Cape and Villains Inc. on Amazon, who puts up a review in the next few weeks, will go into the drawing. Note that the review’s star-rating will have no effect on your chances in the drawing (although it might affect what I write inside the cover…). Each review earns a spot in the drawing, so reviews of both WtC and VI will be worth two spots. Both books are now available through Barnes and Noble as well, so reviews posted/duplicated there will also count; in theory a new reviewer could “enter” the drawing four times, but someone who has already reviewed both on Amazon can still enter twice.

So have at it, and I will return my attention to Artemis. “Hopefully” her story will fulfill the many reader expectations the announcement of Bite Me has built.

12 thoughts on “Thoughts on Astra, and A New Drawing!”