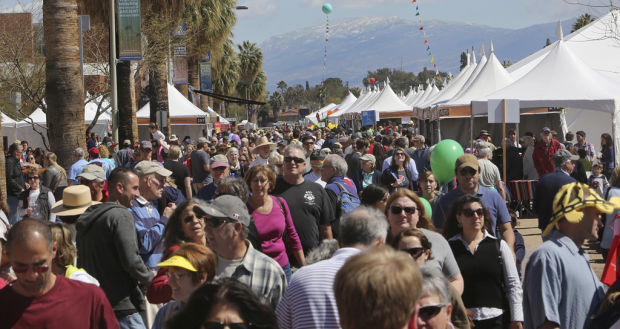 Under different circumstances, I’d have thought I’d died and gone to heaven. Yes, heaven may bear a strong resemblance to a book festival.

I published Wearing the Cape in mid-2011, have seen it hit the top of its Amazon category, written a sequel and a side-story, sold thousands of copies, and never tried to physically market my books. Then I met an author from a small press who sells books the old fashioned way–over the counter or table–and he convinced me to see what I’d been missing.

So this weekend Maxwell Alexander Drake and I took a booth at the Tucson Festival of Books. For those who don’t know him, Drake writes the Genesis Oblivion epic fantasy series. It’s published by a small press, so although it is available through bookstores, you won’t find it on the shelves very often and he currently makes most of his sales across the table at conventions and book fairs. The irony is, this is a series that has won awards and is highly rated on Amazon; yet there are so many epic fantasy novels out there that it disappears into a sea of books. Wearing the Cape, standing out in a much smaller and less populated genre, blows it away in online sales.

So, the Tucson Festival Of Books was a chance for me to learn a new side of marketing by watching a master of his trade. Following are some notes from the weekend, in no particular order.

First Sale: Bite Me: Big Easy Nights, to a lady wearing a red hat (the least colorful part of her outfit) who asked “Do you have any vampire stories?”

Most Interesting Comment: “Thank you for giving her a costume that won’t fall off!” (Referring to Astra on her covers.)

Weather Report: It snowed north of Phoenix, and rained off and on all Saturday. In Tucson in March? Really?

Worst Thing About The Weekend: My feet–I stood for nine hours straight both days. Aargh.

Cool Stuff: We stopped and ate dinner with Mike Stackpole on the way down (he said he is writing a “sequel” to In Hero Years…I’m Dead.), and David Brin stopped by our booth to compliment Drake on his awesome covers.

Takeaway From It All: Cover art is king. Lots of festival-goers got sucked over to our booth by banner screens of Drake’s books (see Brin’s comment). I have had Amazon reviewers comment that they gave WtC a look because of its cool cover–thank you, Victoria!–and this is even truer at a book fair. Why? Because of this. 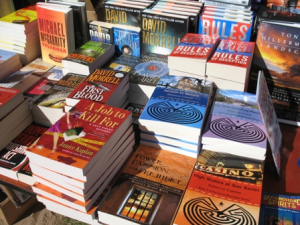 Multiply this table by 100 more booths. You are competing with a sea of trade paperbacks, and first they have to notice your book. Then they have to decide to trust your book enough to drop $15 on it. For this, cover art, back-cover blurb, and maybe even your first page, have got to be golden. They can’t say “I’m a book by a self-published author who couldn’t sell this to a publishing house, but trust me, I’m really very good. Really.”

So spend the money; small-press publishers even fall into this trap, but look at the cover of Farmers and Mercenaries. 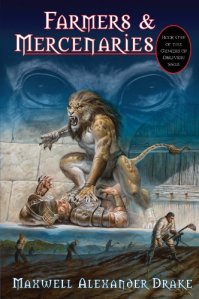 Now that’s a cover. Imagine this cover, and the cover of his third book (due out this summer), as big banner screens flanking the booth where thousands see it as they walk by. Yep, we got a lot of attention, and I’m going to get a banner screen done of WtC before my next event.

So, from the indie-writer’s perspective, was it worth it? Yes, for a number of reasons. For one, based on my sales, it looks like Drake’s publisher may also be picking me up. For another, this was my first book-signing experience, even if I was just signing the books as people bought them. I also sold enough trade paperbacks (quite a few as complete sets) to pay for the trip, something a lot of self-promoting writers fail to do. Will I do it again? Oh yeah. Coming soon to a convention near you.

5 thoughts on “Two Days In Tucson”