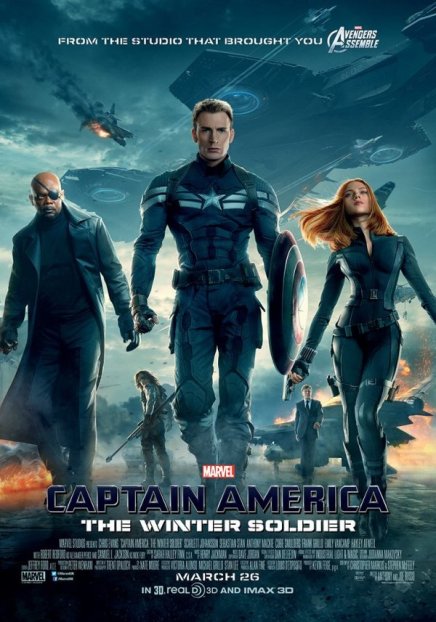 I know I’ve already talked about the new Captain America movie, but I just caught an excellent article on Law and the Multiverse. It discusses Operation Insight, the initiative that Alexander Pierce *cough* Hydra spearheaded within SHIELD and Nick Fury–perhaps tired of the “long twilight struggle–approved. Because, really, Operation Insight and the “pacifying action” planned by Hydra to create a peaceful world was about two things: the morality of profiling and preemptive strikes.

To quote Law and the Multiverse:

“All Pierce wanted was peace on earth for 7 billion people, in exchange for one third of one percent of the population. That is all. In medical terms, it is laser hair removal. As the miniscule means to such a glorious end, it is easy to see how Hydra persuaded so many people to stand behind Project Insight, to set the targets, and even pull the trigger.

“In any genocide, giving the horrific act a proper name that followers can rally around is very important. Hitler called the Holocaust the final solution; other names for mass murders have included cleansing, purging, and even a great leap forward. Such was the case with Project Insight. Calling it Insight made it feel pragmatic and enlightened.

“Another common thread in each of these events was the same as we mentioned above, an insidious campaign to demonize and dehumanize a specific group. By getting everyone to agree that the identified group was a detriment and threat to civilized society, profiling was an easy sell. Racial, cultural, ethnic, and even idealistic profiling preceded each of the above events.”

So is the movie a blanket indictment of profiling?  More of a cautionary tale.

The problem that a lot of people have when they talk about profiling is they confuse the observation with the action. The truth is that we all engage in profiling; the first impression we get of anybody is a quick visual, auditory, possibly even olfactory impression. Our minds immediately sort and classify, “profiling” the person who stands before us. It narrows our menu of immediate responses, at least until we gain more information. “You have only one opportunity to make a first impression.”

Of course if you rely only on first impressions, allow it to skew you subsequent observations, or profile people according to completely irrelevant criteria and sort them into invidious stereotypes…you may be a bigot, and you’re certainly being stupid.

Can government ethically profile? Well, yes–but depending on how and when.

For example, law enforcement and intelligence agencies have limited manpower and monetary resources. When they are information-gathering (possibly the most exhaustive and costly part of what they do), it makes sense to pay closer attention to groups who have a history of the kinds of behavior they are looking for.

They can ethically do this so long as they do not take the next step based only upon profiling. For example, the FBI may single out known members of crime families for observation since they are known to engage in racketeering and other forms of organized crime. But they cannot get a warrant to search Vinnie’s home simply because he’s Vinnie, and if they harass Vinnie then he has cause to sue.

The big debate about Stop and Frisk is whether it is being done appropriately, based on suspicious behavior, or based on pure profiling, because the suspect is a suspicious person. In the hands of badly trained or just bigoted police officers, this can easily degenerate to harassing or arresting citizens for Walking While Black.

One interesting twist on the profiling issue–and coincidentally on the data-mining issue–is that advancing technology is both aggravating these problems and creating solutions.

Imagine if all cops wore Google Glasses with face-identification software. A lot of the Stop and Frisk issues would disappear if police on the street could easily identify a suspect and determine whether or not he had a criminal record. Of course this simply creates a more refined layer of profiling. But on the other hand, if everybody else were also wearing Google Glasses (including the individual stopped and frisked), the incidence of improper Stop and Frisk actions would drop through the floor; instead of your-word-against-his complaints, you would have a video and audio record of the police officer’s actions.

Who watches the watchers? We the people. Police internal affairs departments are already pushing to make police officers wear their own cameras for just this reason–and abuse of authority would be even more strongly deterred by civilian recording.

A similar situation is happening inside government; emails have become the preferred method of departmental and inter-office communication, and this leaves an almost ineradicable electronic footprint. The scandal of the IRS’ targeting (profiling with invidious criteria) of conservative non-profit organizations and donors, would never have been verified as it has if it weren’t for the electronic trail. Memos, reports, directives, notes, all electronic, are creating “transparency” in government beyond what any law could do, and the Freedom of Information Act enables citizens to watch what their elected leaders and their appointees are doing.

Which is actually a massive digression from what Law and the Multiverse went into. Read it; it is strong food for deep thought.

One thought on “A Winter War”