Wearing the Cape: the Kickstarter. 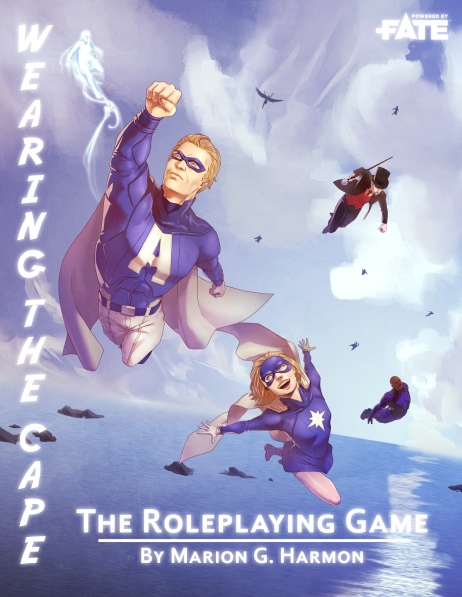 Coming soon, to a Kickstarter page near you!

I have been telling everyone that, once Team-Ups and Masterminds was behind me, I would be focusing on Wearing the Cape: The Roleplaying Game to drive the project through to completion.

So now the good news.

Although the Kickstarter campaign will not be launching in December as planned, there is a light at the end of the tunnel. Here’s why; unlike most Kickstarter projects, when this Kickstarter campaign launches (hopefully in January), the primary product to be funded will already be finished. What this means is that Wearing the Cape: The Roleplaying Game will already be fully produced as a downloadable set of game rules. That’s right, it will be an ebook, fully laid out and with all the art, ready to read, enjoy, and play.

I realize this is not the “traditional” way a game is produced by crowd-funding; I decided to take this route because I had no idea if I could actually do it. Yes, I have years of roleplaying game experience. Yes, I found a great open-source game system, readily adaptable to the task of bringing the heroes and world of the books to life. Yes, I have five years now of self-publishing experience.

But a roleplaying game? Designed, produced, indie-published without the backing of an established game company? I had no idea if I could do it, or how long it would take, and I have seen too many Kickstarter campaigns that promised everything and a set delivery date, then folded years later promises unmet. I wasn’t going to do that.

So I wrote a draft of the game, solicited playtesters, found the artist. Found another artist. Found a third artist. Got help with the graphics and layout (lots of help). Went through two rounds of playtesting, with veteran Fate players and novices. Sought and received the input of two seasoned writers of Fate System games. Payed the art and development costs as I went. Found a small press willing to do the full print run of the quality gamebook at a reasonable price.

As a result, I will be able to promise everyone who decides to back this dream project two things: 1.) the week the Kickstarter campaign ends, they will be receiving their tickets to download the full copy of the finished game, and 2.) the instant the campaign ends, the small publisher will receive their money and commence printing of a fully prepared book.

In short, the purpose of the Kickstarter will be to fund the printing and distribution of several hundred quality hardback edition of the gamebook.

First, I’ve found a dice company able to stamp high-quality custom dice; as a Stretch Goal Add-On, Wearing the Cape fans who want custom dice to play their game with will get them as part of a deluxe package. 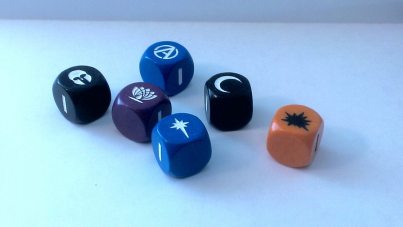 (Don’t panic; the game will be perfectly playable with standard Fate Dice or  6-sided dice.)

Second, Kickstarter campaigns form communities of enthusiastic people with lots of input to give, and I’m going to take full advantage of that. I have decided to produce, as a second Stretch Goal Add-On, Wearing the Cape: Barlow’s Guide to Superhumans.

Barlow’s Guide will be a sourcebook. The core game only has room for around 30 pages of background for the Post-Event World, and only the Sentinels—as seen at the beginning of Wearing the Cape—are fully written up. Most of the campaign background only deals with The Event and it’s aftermath in the US. So Wearing the Cape: Barlow’s Guide to Superhumans will go far beyond that. The sourcebook will hugely widen the background, to include experiences of The Event in other countries and describe how many parts of the world dealt with superhumans over the 10 years between The Event and the beginning of the series. Wearing the Cape fans will be polled for places and capes they would like to see in the sourcebook.

Also, there will be a limited number of pledge slots for fans who want to put their own cape characters into the official Post-Event World! They will need to pay extra for the excellent character art that will portray their personally designed heroes  (I have gained the commitment of the artist who did the cover art for Team-Ups and Crossovers for the individual pieces).

Throughout the 35-day campaign, I will be publishing Kickstarter updates tracking the ideas and work to go into Wearing the Cape: Barlow’s Guide to Superhuman—which will also be released as an ebook within 3 months of the end of the Kickstarter.

Will there be anything else? I’m not sure, but if the campaign does as well as I hope then I am considering adding a third Stretch Goal Add-On: a special hardback edition of Wearing the Cape, re-edited and with interior art pages.

What will all this look like? That’s still a bit up in the air, but I’ve roughed it out like this.

A Barlow’s Guide entry for your hero: $200 (Includes WtC:RPG hardcopy, PDFs for WtC:RPG and WtC:BGtS, and a print of your hero.

And if all goes well, backers will be receiving their e-copies of WtC:RPG in February. Thoughts, anyone?

I am a reasonably successful self-published author ("successful" means I can pay the bills and am highly rated in my Amazon category), former financial advisor (writing is more fun), and have something in common with Mitt Romney and Donny Osmond. Guess.
View all posts by George →
This entry was posted in Uncategorized and tagged Fate, Kickstarter, roleplaying games, Wearing the Cape: The Roleplaying Game. Bookmark the permalink.

35 Responses to Wearing the Cape: the Kickstarter.