Awhile ago someone asked me where I got my ideas for Wearing the Cape, and I had to think about it. Not that I didn’t know the answer, but it’s a bit of a story. Comics came first, of course, but the core idea–a socially realistic superhero world–came from a game. A role-playing game (RPG) to be exact.

I started with good old Dungeons and Dragons, but discovered GURPS (the Generic Universal Roleplaying System) while in high-school, and I was off to the races. There were (and still are) three popular roleplaying settings–fantasy, science-fiction, and superhero–and GURPS did all three. It was also one of the first RPGs to branch out into mythic and “reality-based” roleplaying, and it even brought in works of science-fiction and fantasy so that players could create characters and adventure in worlds they had read about and loved. Just some examples:

That’s right, they wrote world-books for Diskworld and Star Trek, among others. Geeks around the world rejoiced. But what really interested me was their superhero supplement–when I found it my love of comics and love of role-playing games came together hard. 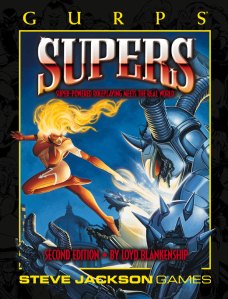 GURPS Supers not only had all the rules needed for recreating the superpowers of all my favorite comic-book heroes, it had a thoughtful chapter on playing superheroes in the “real world” and an example setting. It asked the questions: how would society react to real-life superheroes? how would the law handle them? how would superheroes effect law-enforcement, research, diplomacy, war? And just how many heroes would die in those superhero battles that seem to happen all the time? (Answer: lots.)

GURPS Supers didn’t try and answer those decisions definitively, but it gave good hints and lots of food for thought. I made a lot of notes back then, and the world of Atlas, Astra, and the Sentinels first took shape as a superhero campaign for players to adventure in. I wrote up character-sheets, created institutions, teams, supporting characters and villains, and sketched out a basic timeline describing the Event and how history changed afterwards. It was a lot of fun. Too bad I never got around to refereeing a gamer group in the setting. The Atlas Campaign never happened (sigh), and my notes went in a box. But then something happened to breath a second life into my old hobby.