Almost a couple of months ago now, I promised to talk more about world-building and superheroes–how I arrived at the Post-Event setting Wearing the Cape takes place in. So let’s talk about comic-book history and choices.

Where do superpowers come from? In the golden age of superhero comics, the answer was easy: anywhere. You could get struck by lightning, fall into a tar pit, be bit by radioactive spiders, be cursed, be possessed, receive a strange family heirloom, be trained by a master, be an alien, discover a dead alien’s superscience weapons, make your own superscience stuff, be a mutant, be a god or demigod, be a half-man half-whatever. Any unusual event or circumstance could justify gaining superpowers. I call this the Open Source or Kitchen Sink origin of superpowers. A few posts back I talked about Wildguard, one of my favorite superhero comics. 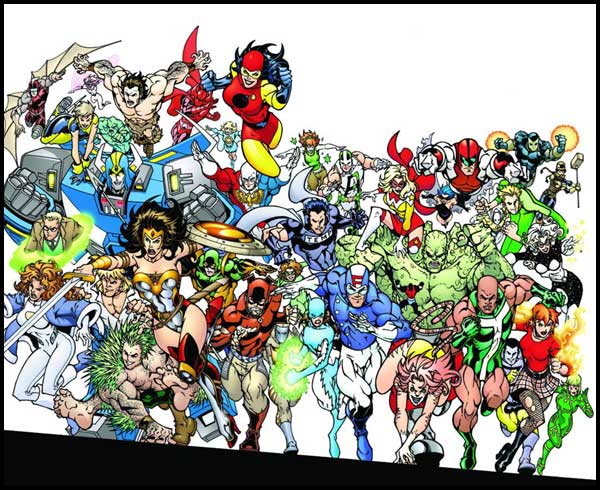 The cast of dozens included cat-men, mutants, aliens, robots, sorcerers, gadgeteers, and just plain weird folks. The comics didn’t even bother explaining individual hero’s origins; if you couldn’t tell by looking at them, they were probably mutants or the results of accidents. The settings of the two biggest superhero comics publishers, DC (Superman, Batman, Wonder Woman, etc) and Marvel Comics (The X-Men, Iron Man, Thor, Captain America, Spider Man, and so forth) are still Open Source, as you can see from the names; in those two lineups we see mutants, extreme athletes/martial-artists, scientists, experiments, aliens, Amazons, and gods. Put them all together and you have quite a show. 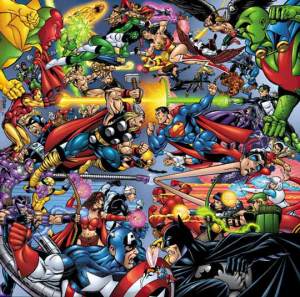 However, while Open Source is easy so far as creating individual superheroes, each new source creates contextual problems for the comic-book world as a whole. Take the DC Universe: Wonder Woman was created from clay by the blessings of the Greek gods. Superman came to Earth from another planet. Captain Marvel was empowered by an old wizard. Aquaman is the King of Atlantis.

So the DC Universe is nothing like home. It’s not Kansas. With its secret civilizations, meddlesome gods, alien empires, superscience, and every kind of magic, it’s not even Oz. 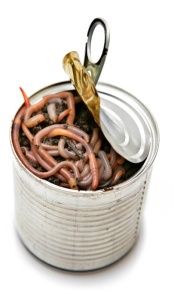 Which opens whole cans of worms. If the Greek gods are real, what does this say about Christianity (exclusively monotheistic, after all). If aliens are real and regular tourists, why hasn’t at least one sold us their technical manuals in return for mining rights to Jupiter? Are there no extra-terrestrial capitalists out there?  If magic is real, then why don’t we have effective witchcraft-based alternative medicine? And above all, why, when scientists can build powered armor, robots, and teleportation devices, do I have to stay home and mow my lawn this weekend?

I’m not saying that comic-book writers haven’t come up with answers to these various questions: they have. Lots of times. But each new explanation still takes the setting one more step away from the Real World, where gods and aliens don’t visibly walk among us and we still don’t have robots, laser pistols, jet packs, and spaceships (or actually we do, and they’re all disappointing). Apply social realism to these hodge-podge worlds, and you’d have theological debate on a whole new level, an arms and technology race to bring our militaries up to levels needed to repulse the occasional alien invasion, and government regulation of magic charms and black cats. 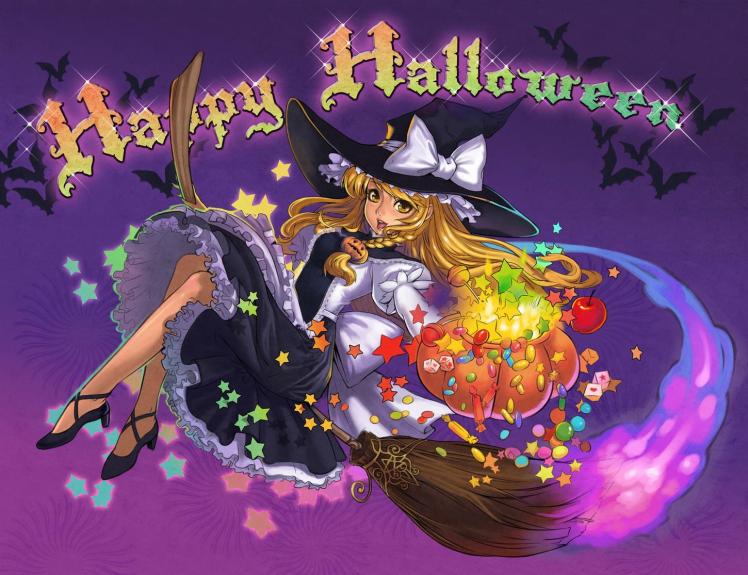 Does she have a license for that thing?

As comic-book readers aged, many comic writers began exploring just these questions and found that the Open Source approach had its problems. They began to experiment, which leads me to a major development in superhero-comics: the Single Source or Single Origin. 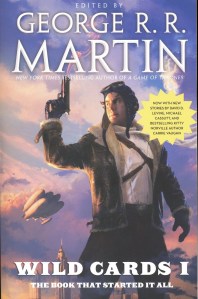 My first encounter with a Single Source superhero world was in a science-fiction anthology series called Wild Cards. George R.R. Martin (yes, that George R.R. Martin) wrote some of the stories and acted as anthology editor. An alternate-reality setting, the Wild Cards world is our own until the end of WWII, when an alien race decided to test a genetic virus on our population. The Wild Card virus rewrote its victim’s genetic code, spontaneously mutating him. Nine out of ten times the mutation was fatal, but one in ten victims survived, often grotesquely changed into “jokers.” The lucky ones (one in one hundred), who survived untwisted and manifested superhuman powers, were called “aces.” And aces who’s powers strongly resembled those of comic-book superheroes often gave themselves codenames and had a thing for spandex costumes. The Wild Cards series focused on social realism, and having all the world’s superheroes explained by an alien virus gave the setting the kind of concrete, alternate-reality feel that traditional Open Source settings lacked. 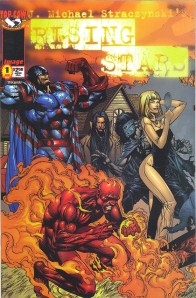 The first Single Source comic-book series I encountered was Rising Stars. In this setting, in 1969 a falling meteor explodes over a small American town, and the 115 children subsequently born all have super powers. Whether they wanted them or not. The series is about the lives of these Specials. Some of them don masks and capes. Many don’t. The government gets involved, and let’s just say things don’t end well.

Since then television has gotten into the act, with The 4400,  Heroes, and No Ordinary Family drawing on the same themes. Even Smallville went this direction for awhile, with all the supervillains Clark Kent ran into being meteor-freak mutants.

As you can imagine, from a writer’s point of view a Single Source, Event-based origin is incredibly useful. For one thing, you can pick a date and say “On this day, everything changed.” This gets you out of having to explain why superhumans haven’t been changing history since the beginning of time. Before the Event, the superhero world was our own world, its history our history, 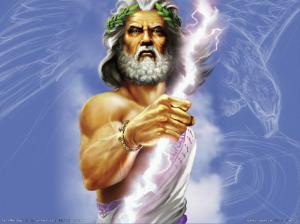 so this guy can stay mythical–unless you want all your superheroes to be demi-gods. In any case, he doesn’t have to share the same universe with E.T. (unless he’s a space-god and magic is really all about Clark’s Law). You can limit your superpower origin to a single can of worms.

It should be obvious by now that the Post-Event setting of Wearing the Cape isn’t exactly original. It’s an Event-driven, Single Source superhero world, and I think the only new twist I may have added (and for all I know somebody out there beat me to this) is that I didn’t explain what caused the Event. And I never will. In the Real World we seldom have the luxury of knowing why–so why should the Post-Event world be any different?